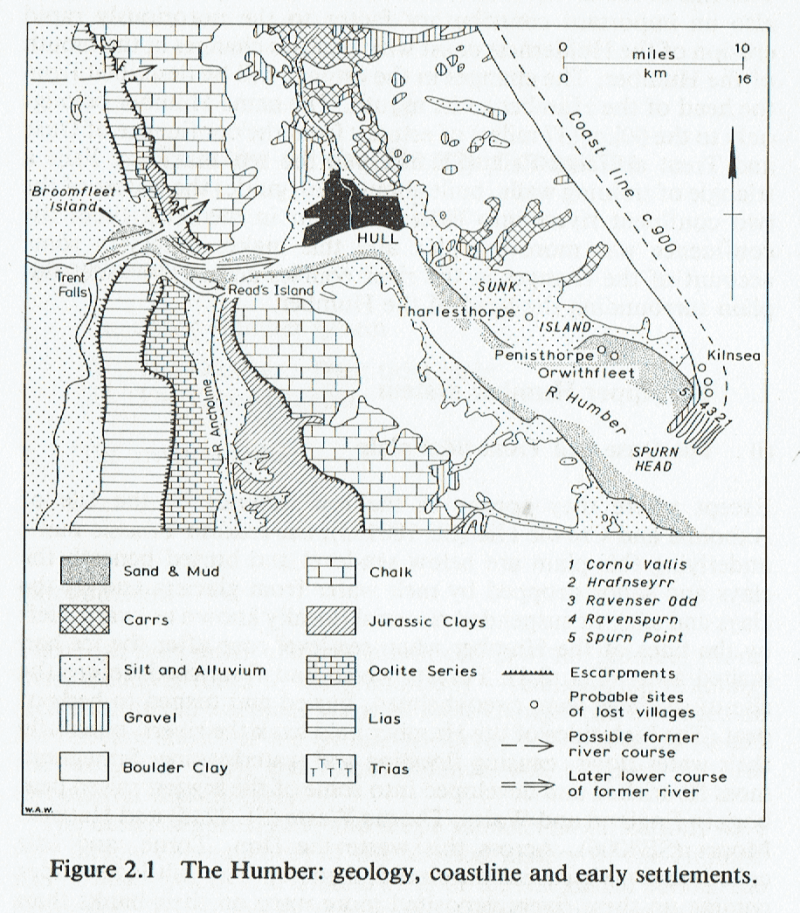 Apologies to any regular readers for the month+ delay in completing this series of blogs initially centering on my extended article of similar title. I have experienced some ill health and have had to focus on preparing my contributions to the national Heritage Week events in Hull – second illustrated talk on Thursday 16th, 10am at the Wrecking Ball establishment on Whitefriargate entitled ‘Hull’s historic communities’, this broadly related to a series of blogs I wrote about a year ago (see summer months 2020 in the search system).
The previous blog to this shows that I had finished covering the chalk escarpment across the region and my last chart was to show the connections between geology and settlement patterns.
Holderness, (sometimes known as the Plain of Holderness, a term of uncertain origin), is the region east of the River Hull valley and of Hull itself, and is bordered by the North Sea to its east, by the north bank of the Humber Estuary to its south and by the dip slope of the Yorkshire Wolds to its north. As such it is an area historically with few direct links to the north of England and beyond because the River Hull had few bridging points (historically) and access to and from the sea was problematic. It is thus surprising to learn that Holderness was one of the country’s areas of highest density of population prior to the Norman invasion and throughout the Middle Ages (see later).
Holderness was/is ‘new land’, it being a product of glacial deposition in the late Devensian Ice Age some 20000 years ago. Previous to this deposition, during some inter-glacial periods and pre-glaciation, the coastline followed the base of the dip slope of the Wolds, with the post-glacial Hull valley and Holderness then being at the bed of a shallow saline bay.
The above geological map is taken from Jones, N.V. A Dynamic Estuary: Man, Nature and the Humber (Hull University Press, 1988, 18).
(to be continued).