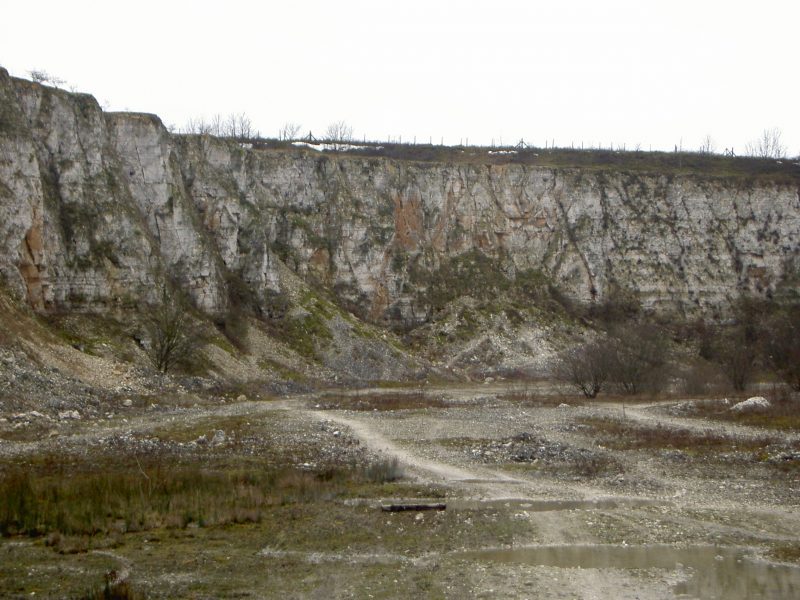 The photo. above shows the ‘cliff-face’, not on the coast as at Flamborough Head, but at the head of a chalk quarry on the south-Humber bank just west of the parish boundary between Barton on Humber and South Ferriby and commonly known as Leggett’s Quarry (chalk quarrying here ceased in the late 1960s so the cliff-face and quarry floor provide a good example of flora regeneration on exposed chalk surfaces). In some parts of Europe chalk is mined but on Humberside chalk has always been quarried and quarry-men worked in the open.
By far the oldest chalk quarry in the region is the one that now forms part of the Humber Bridge Country Park in East Yorkshire at the northern end of the Humber Bridge (the quarry floor and cliff-face often known as Little Switzerland). The Meaux Chronicles (s.p.b.s) record that ‘stone’ for the conventual buildings came from a quarry at Hessle, this the forerunner of the present quarry. Almost certainly back in the 13th century the blocks of chalk would have been shaped by stone-cutters at the quarry floor before being transported to the abbey site, this to reduce the volume of un-needed stone being transported. Overland transport of the stone would have been kept to a minimum as when the site of the abbey and that of the quarry were distant transport of stone costs were the greatest demand on the project’s budget. In the case of Meaux Cistercian Abbey the stone from Hessle would have been transported by boat/raft along the north shore of the Humber Estuary then up the River Hull and finally along a canalised drainage channel to the site itself. I have recently come across an A5 size book which gives much information on medieval quarrying, building and transportation of stone using many surviving illustrations from Continental sources – Erlande-Brandenburg, A. ‘The Cathedral Builders of the Middle Ages’ (Thames and Hudson, no date given),ISBN 978-0-500-30052-7.
(to be continued)