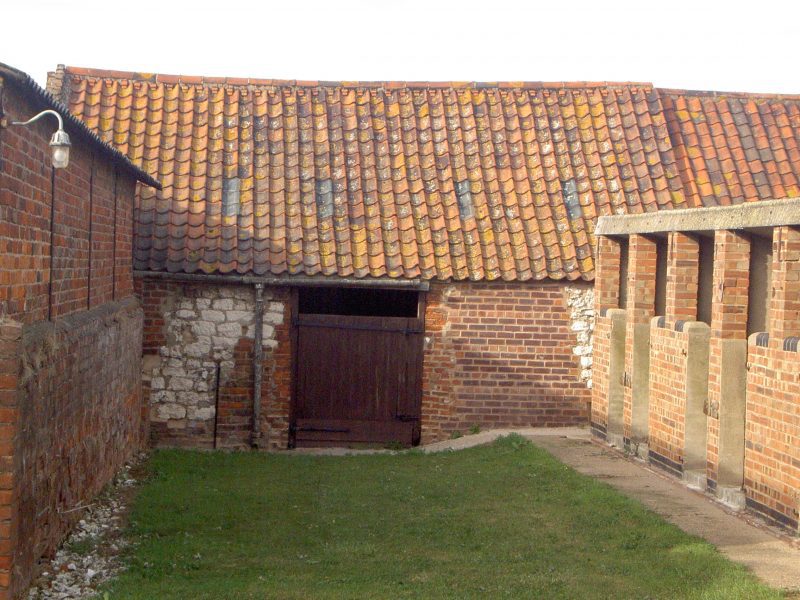 The picture above shows part of the traditional farm buildings of a small farm between Barton on Humber and South Ferriby. It shows walling of chalk blocks roughly cut square and coursed and sections of brick walling of various dates. The steeply pitched roof covered by pantiles, of a type known as Dutch tiles (similar to Spanish style roofing roofing pantiles), may have originally been thatched. The site of this farm on rising land above the Humber Estuary foreshore (floodplain) means that the building materials reflect local raw materials. Chalk is the bedrock on the south Humber valley side while the estuarine clays of the Humber inter-tidal zone, prior to the building of linear flood defenses in the past, provided/provides clay for brick and tile manufacture (see Bryant, G.F. and Land, N.D. ‘Bricks, Tiles and Bicycles in Barton before 1900’ (Barton W.E.A., 2007).
Chalk, a particularly pure form of limestone, is the top strata of those that form the Earth’s mantle where the Yorkshire and Lincolnshire Wolds form the Wolds, this strata tilted down from west to east. Chalk is a rock formed from the compressed exo-skeletons of an infinite number of plankton-like microscopic creatures living in subtropical shallow seas about 90 million years ago. Indeed, the Cretaceous geological era is so called from the classical Greek word for chalk. I understand that under the microscope lots of these exo-skeletons can be distinguished and, presumably, to some extent the porous nature of chalk is a result of the decomposition of the organic parts of the plankton.
Geologists, it seems to me, miss the evocative scope of their discipline – that all life contributes to the planet and the planet to all life. Here little creatures are immortalised in rock in the way that all flora and fauna today when their ‘bits’ are broken down will contribute to life in the future. The planet retains bits of all of us, and always has.