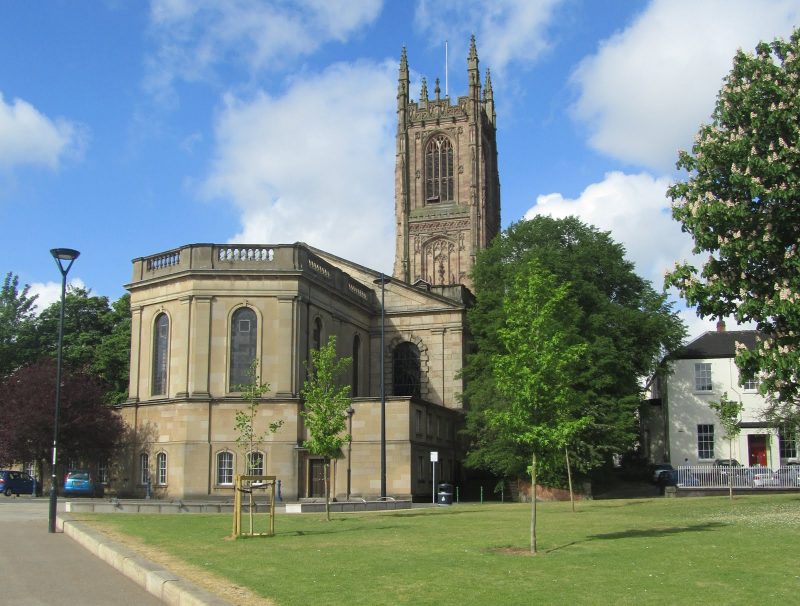 Georgian (18th and early 19th century) churches were radically different from their gothic predecessors if newly built, and often the interior of gothic churches were much altered to conform with the classical fashions beloved of the Renaissance. Typical elements of this style were; plain (often whitewashed) interiors, all features in an open-plan environment, interiors bathed in daylight following the replacement of medieval glass by plain ‘leaded-light’ glass, grand organ cases (often built using imported tropical hardwoods), many monuments (usually sited between the pillars of the arcades) and auditory three-decker pulpits. Salisbury cathedral is an example of a cathedral that underwent considerable ‘Georgianisation’ to the plans of architect Wyatt whereby plain window glass replaced the medieval and many grave monuments removed to create a turfy expance in the cathedral precinct – both these changes much copied later in other cathedrals and parish churches.
The photo above shows Derby cathedral viewed from the north-east. Although this a parish church until 1927 when it was elevated to cathedral status (elevated by the instalation of a chair for the bishop, s.p.b.s) the medieval nave and chancel had been re-built in the 1720s, pioneering the classical style of church architecture. The Perpendicular style gothic west tower was retained, this being mirrored in the parish church in Gainsborough for example.
The coming of the ‘gothic revival’ movement in Victorian and Edwardian times was a reaction against the ‘heathen’ building style of the Renaissance as it was mostly influenced by the pre-Christian classical styles of building. Thus churches often experienced changes from the gothic style of architecture to the classical and then back again to the gothic, although ‘re-gothicisation’ could often seem too pristine when compared with original features. This is very much the case at Worcester cathedral (s.p.b.s).
Stallingborough church near the south Humber bank is a particularly good example of a Georgian brick-built church, the train line from Barton to Cleethorpes passes close by.
(to be continued).