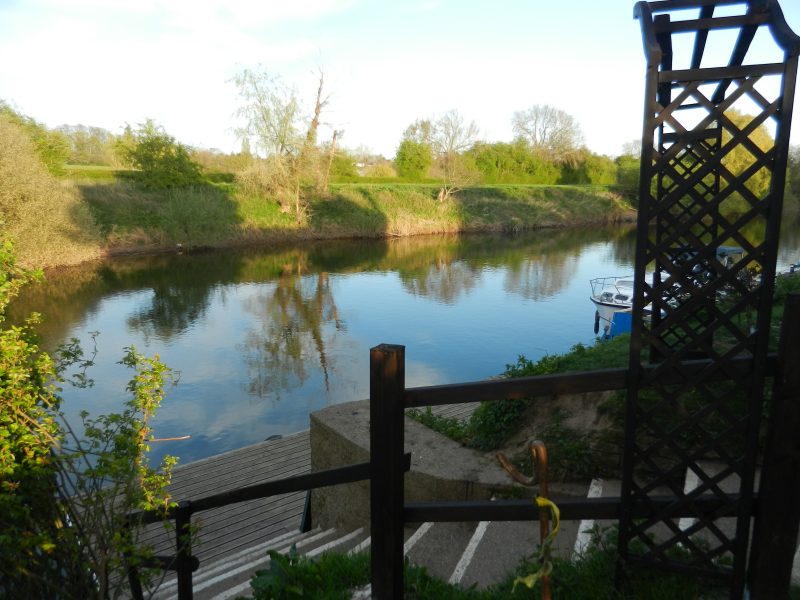 Today’s photo, taken from the same position as yesterday’s, shows the section of the River Severn in front of Camp House Inn (s.p.b. and its website). The building is 10 yards to the right and from it the lawn slopes down to the steps, despite this the property was last flooded in February 2020, the ground-floor to a depth of three feet, in other words a water level of over 25 feet above the River’s current level. Luckily all the sites wildfowl (s.p.b.), except the peacocks and peahen, can swim.
The name seems to demand explanation but none is forthcoming. My idea is that it may refer to a nearby site of hutments and caravans, probably developed in the inter-War years, and similar to the Humberside sites at Aldbrough on the Holderness coast (see Article on this site on this website) and at Humberstone Fitties south of Cleethorpes.
The River Severn is said to be England’s longest river with its source(s) in the mountains of central Wales, although there are those who claim that the River Trent with its mouth at Trent Falls at the head of the Humber is the longest. The River Severn exits a greater volume of water than any other river in England, this into the Severn Estuary and then the Bristol Channel. Unlike the Humber the Severn Estuary is a ‘trumpet estuary’, this the standard shape for an estuary. If in the inter-glacial periods the Humber may have been a ‘trumpet estuary’ it would have flowed into the sea in the Aldbrough area, this assuming that Holderness existed at that point.