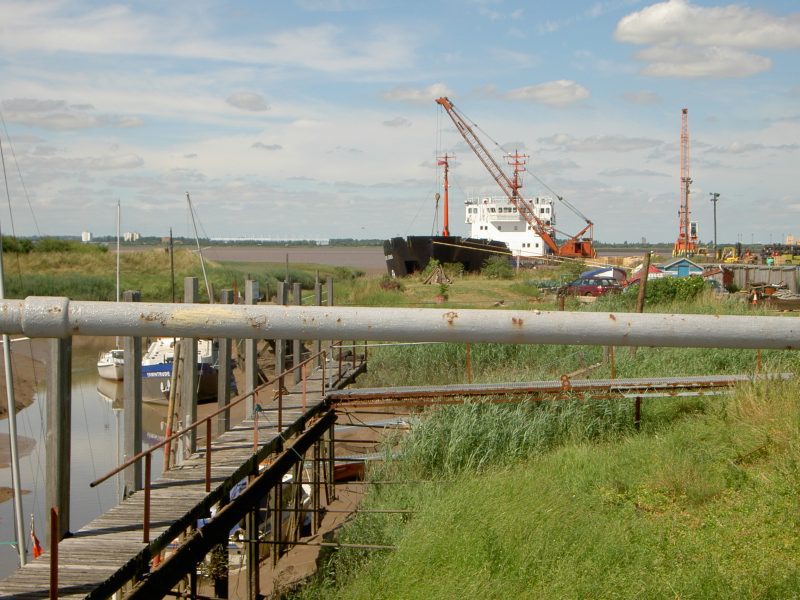 Views of the Humber Estuary 4.

The photo. above shows part of the middle reaches of the Humber Estuary looking north from the mouth of Barrow Haven on the south bank. The large white building in the distance is the Arco distribution warehouse beside the A63 and the main rail-line west from Hull, the Humber Bridge is out of the picture to the left. Occasionally a ship anchors at the side of Barrow Haven, the cargo usually being Scandinavian timber. The photo. was taken standing beside the single-track rail-line carried by a bridge over the Haven, this line being the Barton to Cleethorpes line.
In early October 1541 a royal ship (maybe more than one) carrying Henry VIII and his then wife Catherine Howard sailed into Barrow Haven they having been ferried across the Humber Estuary from the king’s second stay in Hull. Two Navy ships were deployed to escort the crossing. This must have been quite a scene given the constricted nature of the river (different sections of this river in the parish of Barrow have different names, it is a spring-line stream from the base of the Lincs. Wolds, a mile or so inland it passes around Barrow Blow Wells wetland nature reserve administered by the Linc.s Trust for Nature Conservation and downstrem of this there use to be commercial water cress production). National records show that Catherine was entertained at Barrow Hall while Henry went on to visit Thornton Abbey which was still functioning as such, despite the Dissolution of the Monasteries, as it had been converted to a college of secular canons. Later in the 1540s the Abbey was dissolved early in the reign of Edward VI.
There is a good example of ‘don’t believe all you read’ related to this. There was a long-held opinion that Henry went on from Thornton to visit Grimsby. He didn’t, he went on to stay at the moated manr house at Kettleby between Brigg and Bigby (the moated site survives, now with a later farmhouse). I am indebted to Di. Plumb of Barton for researching how this mis-information came about. One day will need to write-up the story.