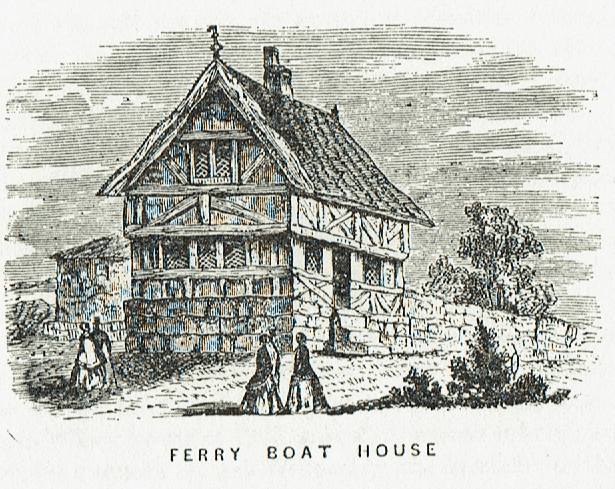 Ball’s The Social History and Antiquities of Barton-upon-Humber, published 1856 and edited by George Poulson (s.p.b.) was different in style to Poulson’s earlier works on the histories of Beverley and Holderness (s.p.b.s) as well as being published in A5 size rather than wide A4 used by Poulson. Also, only a few sketches were included by Ball one being the view of St. Peter’s church (s.p.b.), Barton from the south (s,p,b,), this showing a portion of Tyrwhitt Hall beyond the east end of the church and the then relatively new Regency vicarage to its right (still standing).

Incidentally, another sketch that Ball includes is of the ‘Ferry Boat House’, see above. This rather fanciful-looking property was an example of a ‘baffle-entry’ detached cottage, that is on entering through the centre-entrance ground-floor doorway immediately in front would have been the side wall of brick-built central fire-stack, the pot of the central chimney stack showing in the picture. Two back-to-back fireplaces would have heated the ground-floor rooms either side and maybe two further fireplaces in the loft rooms (see gable-end loft casement window). A timber-frame skeleton sits on a high freestone plinth and the steeply-pitched roof would have been thatch, partly held in place by heavy bargeboards at either side.

The existence of this property seems confirmed by William Hesleden’s map of Barton compiled in 1835 which identifies the site of Ferry Boat House on the south side of Newport near the Finkle Lane junction. However, this site is some feet above the water level of Barton Haven and no evidence of a water-course between the two is in evidence today. Did a stream once flow leading into the head of the Haven up which Humber ferry boats might have sailed/rowed? Does the location of the Ferry Boat House have a completely different explanation?

This has been a bit of an aside from my current theme but I thought it interesting.

(Update and overview for 2021 to be continued).