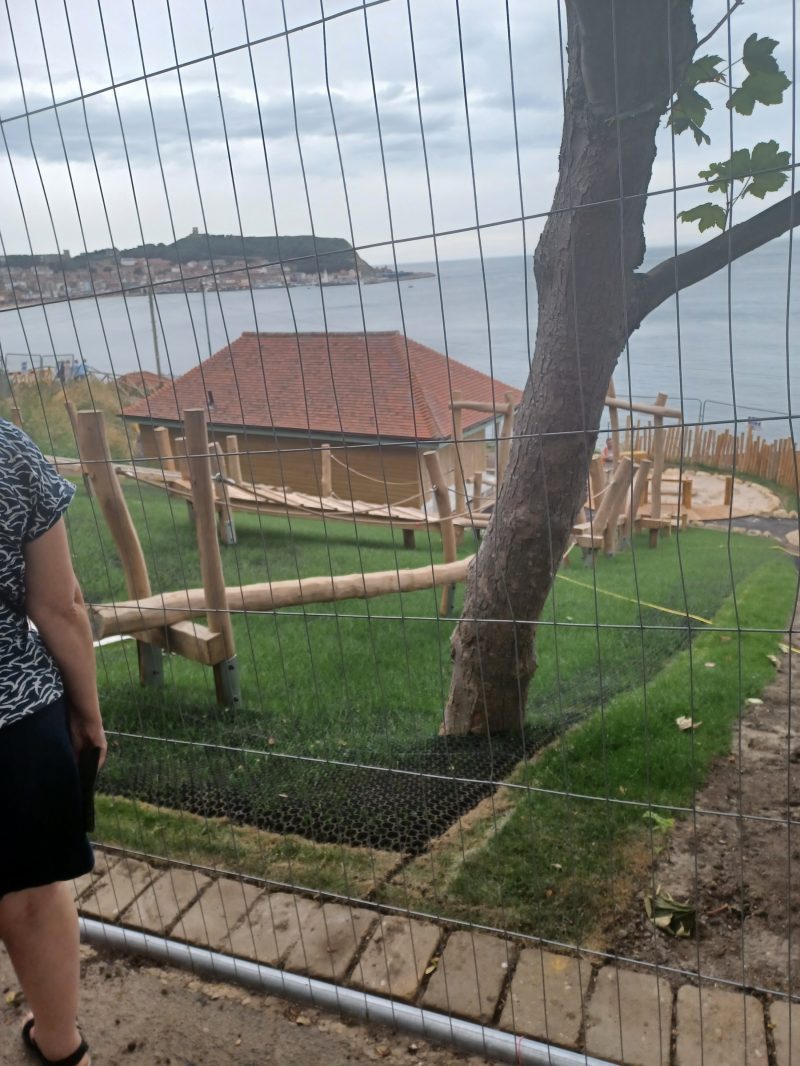 The photo above shows one of the restored shelters (s.p.b.) with a children’s play area being created above on the cliff face.
The creation of gardens on a cliff-face is a project that can be found elsewhere. An example that comes to mind is the point along the North Yorkshire coast at Ravenscar, overlooking Robin Hood’s Bay from the south. Here a grand plan was devised in the late 19th century to create a planned coastal settlement which would have access to the beach, albeit difficult, by steps between terraces cut into the cliff-face, although the gradient here was steeper than at South Bay, Scarborough. On these terraces gardens were to be created which themselves could be destinations for holidaymakers. Although the entrepreneurs managed to get a rail station created here at which trains on the Scarborough to Whitby line would stop, the development project was a financial failure and the resort and gardens were never completed. However, a local road network and drainage system was created and a few houses built, in particular a terrace of four large Edwardian houses which stood near the once station and showed that the plan was to attract the better-off type of resident/holidaymaker. The station has long-since closed as has the railway itself with only some evidence of one of the two platforms surviving.
The name Ravenscar was promoted by the development company, the area previously known as Peak, although a large farmhouse on the site that pre-dated the development was called Raven House, this being subsequently developed into the famous hotel on the site today. One point about this building is that at one point in its history a castellated garden wall was built, this a reminder that such walling in post medieval times has invariably been for decorative purposes only, this true on church buildings as much as elsewhere.
Unfortunately my photos of Ravenscar are all 35mm slides.
(to be continued)