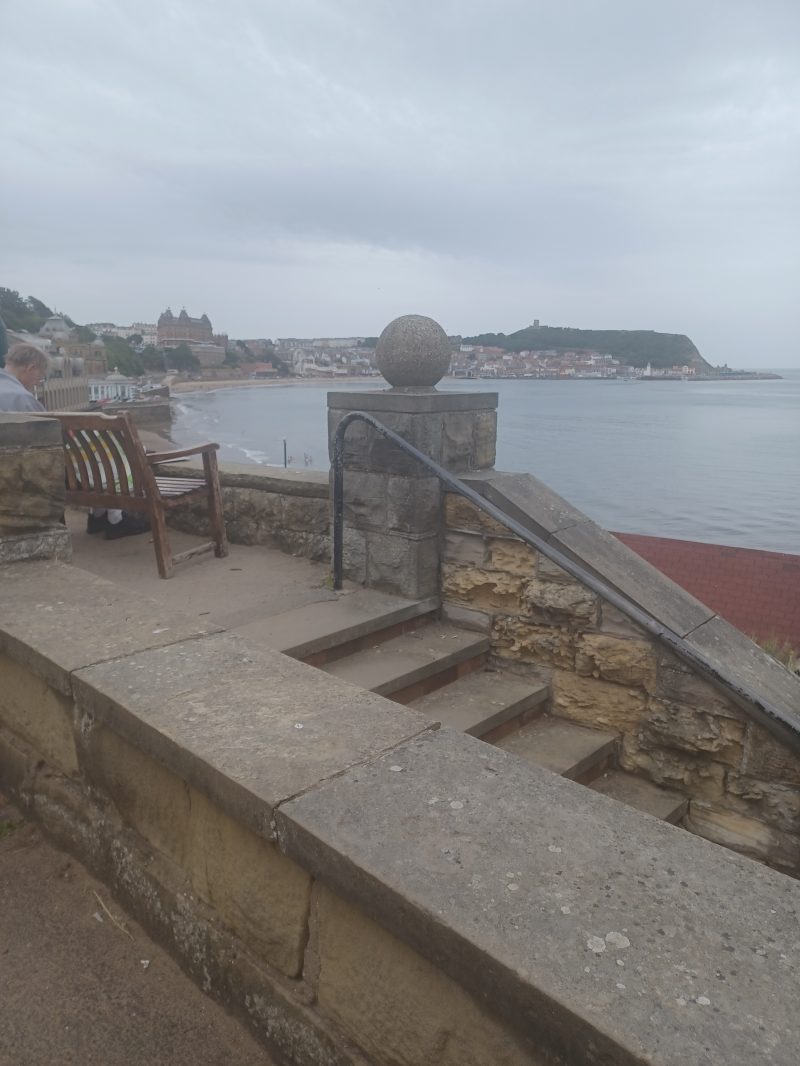 The photo above shows the view north-east from the patio of Clock Cafe, South Bay, Scarborough (s.p.b.).
South Cliff Gardens is in fact an amalgamation of a number of ‘garden’ areas that were created below the Esplanade at various points of time. To catalogue these separate points from north to south: the gardens above and either side of the Spa building were initially created as a private garden in 1837 for a wealthy early resident of the Esplanade as was the Prince of Wales garden from the 1860s. This section of South Cliff is not on the cliff-face at all but at the cliff-top between two roads leading off the Esplanade. The Rose Garden started in the 1880s was also initially a private garden although the Italian Gardens started at the time of the Great War was, from the outset, a public place, as were the Holbeck Gardens nearby. The Shuttleworth Gardens, like the Prince of Wales Gardens, was created on the cliff-top but initially as a private garden for the Shuttleworth family of a wealthy West Yorkshire industrialist at the junction of Holbeck Road and the southern end of the Esplanade. The Holbeck Gardens include the majestic Clock Tower, a triumphal arch toped by a clock set in a pedestal toped, in turn, by a cupola and built in 1911 to celebrate the coronation of King George V. The cliff-face below Holbeck Gardens and leading to the Cleveland Way long distance coastal footpath has been replanted following a landslide down the cliff-face in 1993 which caused the partial collapse of the Holbeck Hotel, later demolished as unsafe. The Edwardian style suburb of Holbeck provides a number of good examples of domestic buildings reflecting the styles of the Arts and Craft Movement.
There are 13 shelters dotted around the South Cliff Gardens and many are being restored to their original state as part of the restoration programme.
The story of South Cliff Gardens is reminiscent of a similar project at Ravenscar, also on the North Yorkshire coast.
(to be continued)