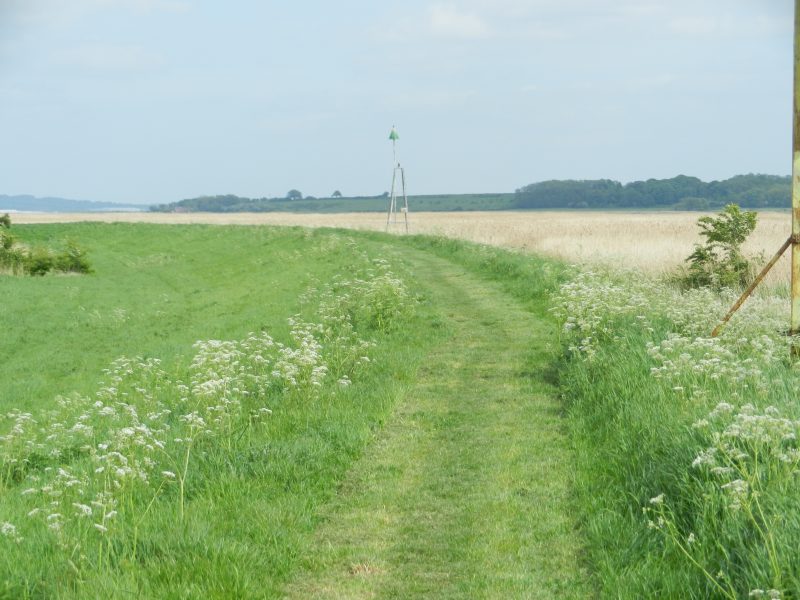 Continuing west from Market Weighton canal lock along the top of the clay bank the walk approaches Trent Falls, the point at which the Rivers Trent and Ouse merge to form the inland end of the Humber Estuary, the ‘head’ of this coastal estuary. The best viewing point by far from which to see Trent Falls is at Alkborough on the south bank because the village sits on top of the lower Lias escarpment (limestone) thus giving a view not only over Trent Falls but across the Vales of Trent and Ouse beyond with local legend claiming that of a clear day the crossing tower of York Minster can just be seen (although I have never been able to pick it out) but Conisborough Castle, for example, certainly is in the foothills of the South Yorkshire Pennines. The photo above shows in the middle distance the partly wooded scarp slope between Alkborough and Whitton, much of the latter village being on the Estuary side. In the foreground the vast reedbed of Blacktoft nature reserve can be seen Estuary-side of the clay bank. Until the re-routing of the River Don in the 18th century (I think, but haven’t looked it up) it also had its confluence with the Rivers Trent and Ouse at the head of the Estuary. Thus medieval ships sailing inland from Hull had access to a vast network of navigable rivers, although navigating the upper Estuary was very hazardous.
The tall object in the photo (centre) is an old aid to navigation, surviving but redundant.
Modern day ships sail from Hull Roads on the high tide up to Goole Docks beside the River Ouse or, less commonly, to Gainsborough or Burton Stather beside the River Trent.
As is often the case along the shores of the Humber the opposite banks are contrasting, here a lowland coast facing across to a hillside.