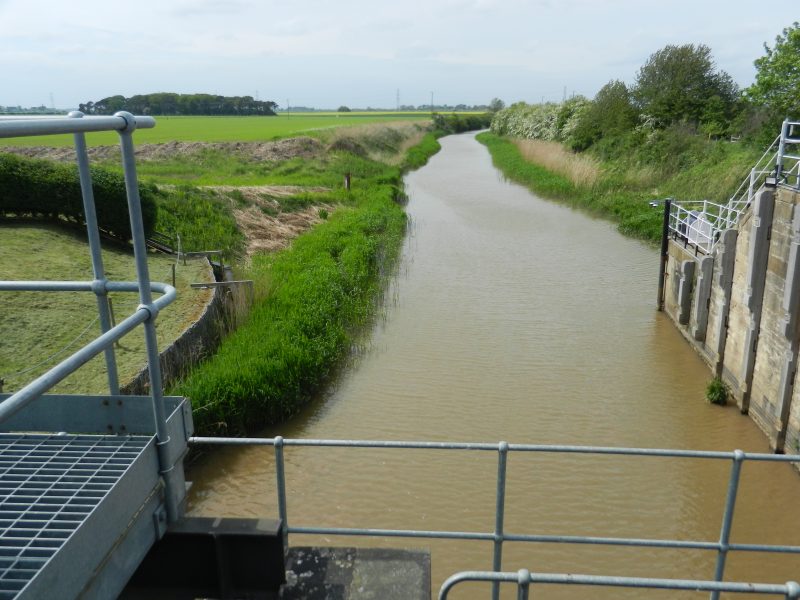 The photo above shows a view north from the footbridge over the lock-gates of Market Weighton Canal and shows a view over this section of Wallingfen. The Market Weighton Canal was created in 1773 by the canalisation of the lower River Foulness which previously meandered across Wallingfen. The economic incentive for the canalisation was the emerging brickmaking industry in the area around Newport (hence the name). The lock at the mouth of Market Weighton Canal only had to be wide enough to take the keels and sloops of the day on which the bricks were transported to their destinations, hence the lock today is little-used (this very like the lock at South Ferriby Sluice, built so that bricks could be transported away, but now used by pleasure-craft taking a ride up to Brigg and back). Like the canalisation of the River Ancholme on the south bank, the canalised River Foulness resulted in the watercourse being a much more effective drainage channel for the Wallingfen area.
With more field ditches leading to the canalised River more of Wallingfen became suitable for arable agriculture, although the range of crops suitable was limited. The region became well known as a hemp production area; this tall, tap-root plant was intolerant of flood conditions but needed plenty of water as it grew and benefitted from the rich estuarine loom that characterised Wallingfen. In the 18th century hemp was grown mainly to provide fibres for the rope, sailcloth and heavy clothing industries. Today it is the seed that, when crushed, is used in a number of industries (like oilseed rape), including health food supplements. Currently the fields of Wallingfen seem to be given over to growing the standard arable crops of Eastern England.
Going back for a moment to Broomfleet as discussed in Humber Estuary 7 – the current church, St. Mary the Virgin, was built in 1860/’1 to the design of J.L. Pearson, an architect of the ‘Gothic Revival’ best known for his work in Lincolnshire, including Lincoln Minster.
(to be continued).