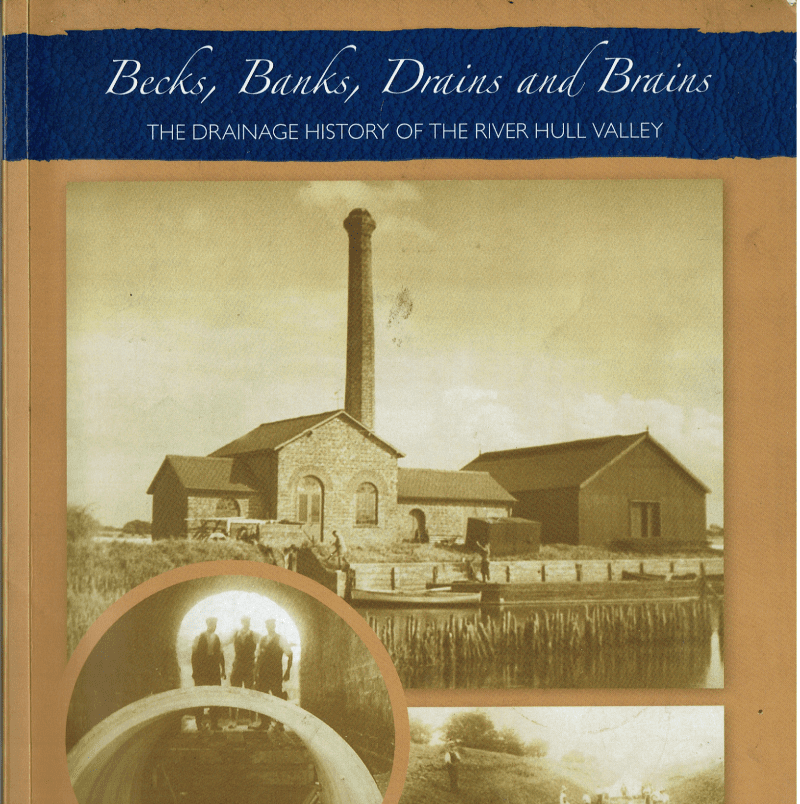 Simplified Geology of the Humber Region 14.

Another source of evidence dealing with the history of the draining of the Hull Valley and west Holderness is the book the cover of which is shown above, Becks, Banks, Drains and Brains, The Drainage History of the River Hull Valley – this published in 2013 by the East Riding of Yorkshire Council. Given a modest initial print-run I would suspect that only second-hand copies are now available. It is much more informative than the 1958 publication (s.p.b.) and includes lots of historic photos. and diagrams.
A comparison of two maps in the 2013 book shows that the southern-most section of Holderness Main Drain was re-routed to exit directly into the Humber at some point between 1810 and 1885, thus preceeding the construction of King George Dock (s.p.b.). Part 2 of this book is made-up of some interesting ‘Case Studies’ such as; Decoys, Barges and Mills, North Frodingham: From wet land to prime agricultural land in one thousand years, Wawne Township Drainage History and The Enforcers: A flavour of the work of the Commissioners of the Courts of Sewers.
Mostly in the 20th century Hull has developed along either side of the lower course of Holderness Main Drain with the development of King George Dock early in the century in Marfleet parish and the 1950s/60s development of Bilton Grange, Longhill and Greatfield housing estates. Holderness Main Drain provides a ‘green corridor’ passing through arable farmland to the north of Hull and through East Hull itself. This fact/aspect of the Drain is currently much better appreciated today than previously and the flailing of drain-bank vegetation less vigous as a result of popular pressure.
Similarly the Beverley and Barmston Main Drain (1799-1800) passes, now, through north Hull, although here the Drain exits to the River Hull at a point in Wincolmlee, thus reflecting the demands of the Port masters back in the day (s.p.b.s).
(to be continued)