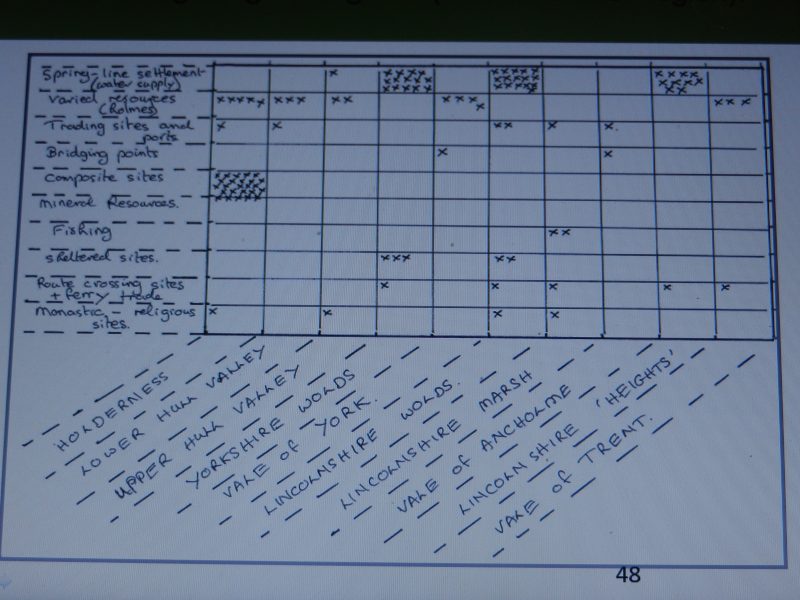 The chart above was one I complied a few years ago. The 10 regions named along the base line are the regions of which part is encompassed in the Humber Region, of these two, the Lincolnshire Wolds and the Yorkshire Wolds, have already been covered by this series of blogs. The side-line identifies 10 types of communities according to the reason for the medieval site existing where it did. Each x identifies a community on Humberside, although a few were located according to more than one type of site. For example, only two settlement sites had fishing as explaining their medieval siting and both these were located along the Lincolnshire Marsh. Similarly, all the communities I considered as ‘composite sites’ (that is a site with a number of equally important factors defining its original location) were located in Holderness.
As can be seen, spring-line settlements along the base of both the dip slopes and the scarp slope of the Wolds north and south of the Humber defines the original site of early occupation of 29 Humberside settlements, that is approximately 30% (this ignoring for now the Lincolnshire Heights). Socially and economically the chalk escarpment north and south of the Humber Estuary has had a significant effect on the history of the Humberside region.
The other geo-physical regions of Humberside yet to be covered by this series of blogs are; Holderness, the River Hull Valley (upper and lower), the Vale of York, the Lincolnshire Marsh, the Vale of Ancholme and the Vale of Trent. Most of these will not receive the same level of attention as has the Wolds.
Again, any reader wishing to explore further can go to the extended article of the same title in section 3 of this website.
However, I have to take a break from committing to three blogs a week in order to prioritise preparing for my presentations during Heritage week, hope to get this done over the next fortnight.