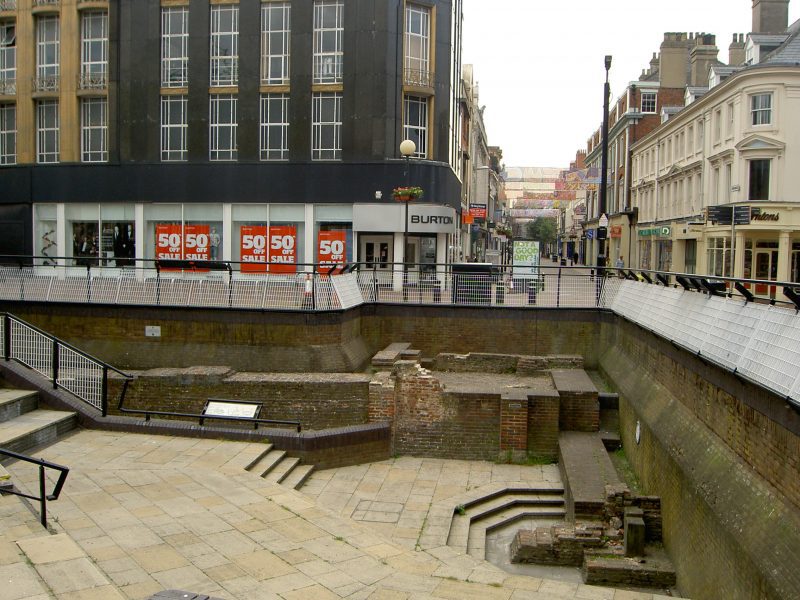 The final location in this series on monastic history is the site of Hull’s Carmelite Friary. The photo. above shows the excavated site of Hull’s Beverley Gate, one of four gates in the late-medieval town wall, with Whitefriargate street stretching east. The name Whitefriargate comes directly from the position of the Carmelite Friary, ‘white’ from the neutral colour of the friar’s cloaks and ‘gate’ derived from the Scandinavian word for street or way. The friary complex was immediately right of this point, just through Beverley Gate, with the friary church being the first prominent building encountered on passing through the gate and into the town. The fact that the name of the street endured across the centuries after the Dissolution might support the notion that in Hull the friars had been well respected. Hollar’s plan of Hull, 1640/’41 shows Beverley Gate centre bottom and the outline of what had been the site of the Carmelite Friary with a few scattered buildings (maybe the surviving from the friary complex), but shows no surviving friary church, this suggesting that the church’s fabric had been plundered across the preceeding century. Ken MacMahon estimates that there might have been just eight Carmelite friars in Hull at the time of the Dissolution (1539).
The Carmelite Order of friars has continued through to the present day, both abroad and at home since Catholic Emancipation. The friars refer to each-other as ‘brothers’ and a prior is described as ‘a leader among equals’. The Order continues under the umbrella of the Roman Catholic Church.
In the Conclusion to her book, The End of Medieval Monasticism in the East Riding of Yorkshire (see early blogs in this section) Claire Cross states that most ‘male religious’ eventually secured priest positions and ‘integrated themselves into the secular church’. That stated two Hull Carthusian ex-monks did migrate to the continent and joined ‘Counter-Reformation catholocism’. She concludes by stating that few ‘romantic ruins’ such as those in West and North Yorkshire survive in the East Riding. As seen above (s.p.b.s) nothing physically remains of most monastic sites while at Bridlington and Swine part of the church remains, as does the prior’s lodgings at Watton and the Blackfriar’s priory ay Beverley.