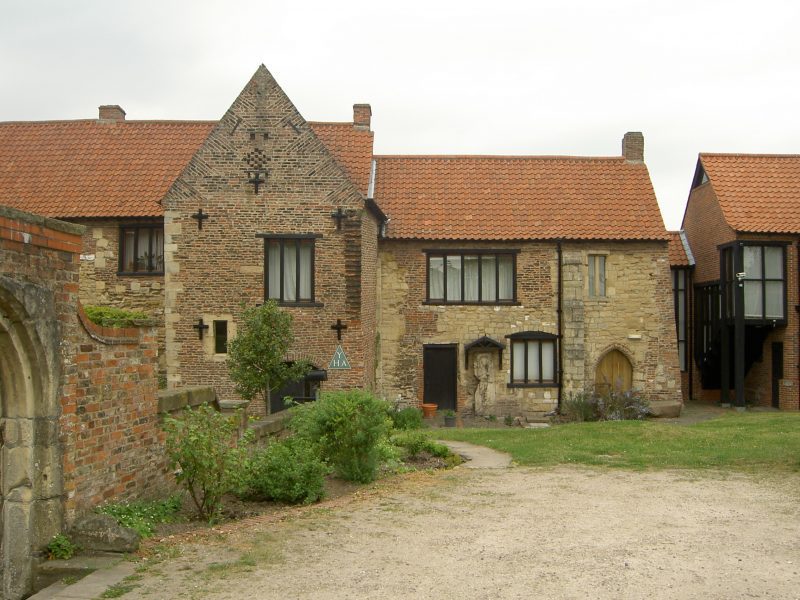 When Ken MacMahon’s history of Beverley was printed (Beverley (Dalesman Books, 1973) he wrote of the site of the Dominican Friary ‘the building stands pathetic, forlorn and desolate – grim evidence of 20th century official vandalism and planned neglect’. By the early 21st century David Neave, in his updating of Pevsner’s Yorkshire – York and the East Riding, p.301, was able to be more positive ‘This restored building, used as a Y.H.A. hostel since 1984, is a significant remnamt of a wealthy Dominican Friary established in Beverley by 1240’. These post-Dissolution remaining parts of the medieval Friary buildings have a complex archtectural history described in detail by D. Neave (p.301), apparently most of the Dominican’s church lies below the nearby section of the Hull to Scarborough rail-line and has in the past been partially excavated on both sides of the line. Unlike most monastic churches (but not all) the cloister and cloistral range of buildings in a friary were directly north of the friary church, this being so at Beverley – perhaps curiously, a few of the slender friary crossing towers have survived intact, one example being beside London Road, Kings Lynn.
MacMahon (see above) tells us about the much less well known Beverley Friary of the Franciscan Order. Sited near the once Keldgate Bar (one of Beverley’s four/five brick and stone gated entrances into the medieval town all of which were demolished in the 18th and 19th centuries except for the surviving brick North Bar) no physical evidence remains and the area is now one of inter-War housing. Documentary evidence proves that this Friary was in existance by the late 13th century and in its day it was equal in status to the Dominican Friary. Ironically this Friary site was originally on the very edge of town but it is at the more in-town site that most built evidence survives.
(to be continued – Hull’s friaries).