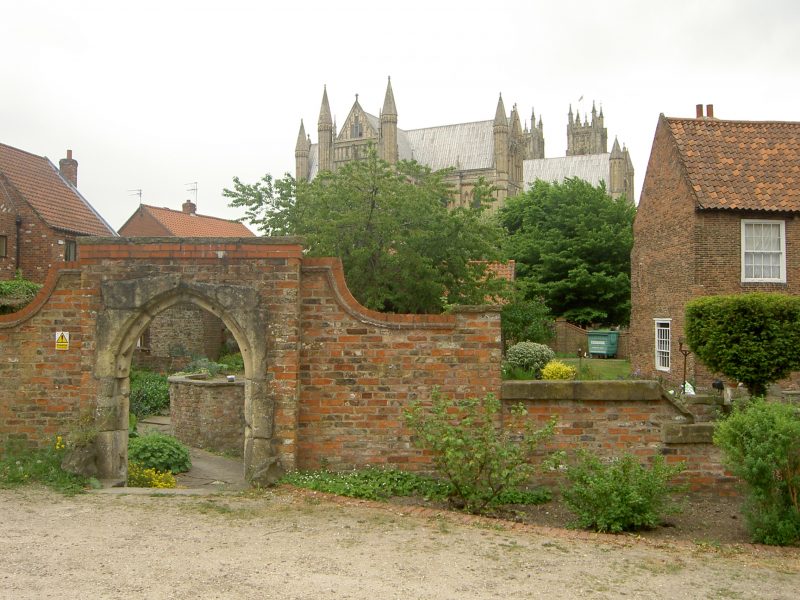 Contemporary with the establishment of Hull’s Carthusian monastery (s.p.b.) friars and friaries had become the most endowed of monastic establishments. Unlike the ‘older’ monastic orders friaries were usually established in urban, rather than rural, areas and the lifestyle of friars was outgoing rather than cloistered. Two results of these points are that friars must have been far more visible than their monastic counterparts in everyday life in 14th century England and, secondly, that surviving built evidence of friary complexes are more rare than those of Cistercian monasteries, for example, because their site post Dissolution in the late 1530s was at more of a premium for other uses as were their building materials for re-use.
The four main orders of friars were represented in the East Riding, the Augustinian and Carmelite friaries in Hull and the Dominican and Franciscan orders in Beverley. The photo above shows part of the remarkably well preserved section of Beverley Dominican Friary with the east end, sub transepts, north transept and west towers of Beverley Minster visible above tree-level. The Dominican friars of the 14th and early 15th centuries may well have watched the progress of the Minster’s re-building programme replacing the earlier minster and leading to the one seen today. Some parts of the Friary complex were there by 1240 and in 1263 Henry III gave the Friary 15 oaks from the Forest of Galtres, north of York, presumably for a further building programme. Houses of friars tended to have few or no lay brethren (s.p.b.s) and prioritised ‘work in the community’ above manual labour – by the early 14th century there were 42 friars resident at Beverley’s Dominican Friary. Dominican friars were known as ‘black friars’ from the colour of their cloaks.
Whether in the floor of the church or in an on-site cemetery this Friary would have been the chosen last resting place of many members of East Yorkshire’s baronial families.
(to be continued)