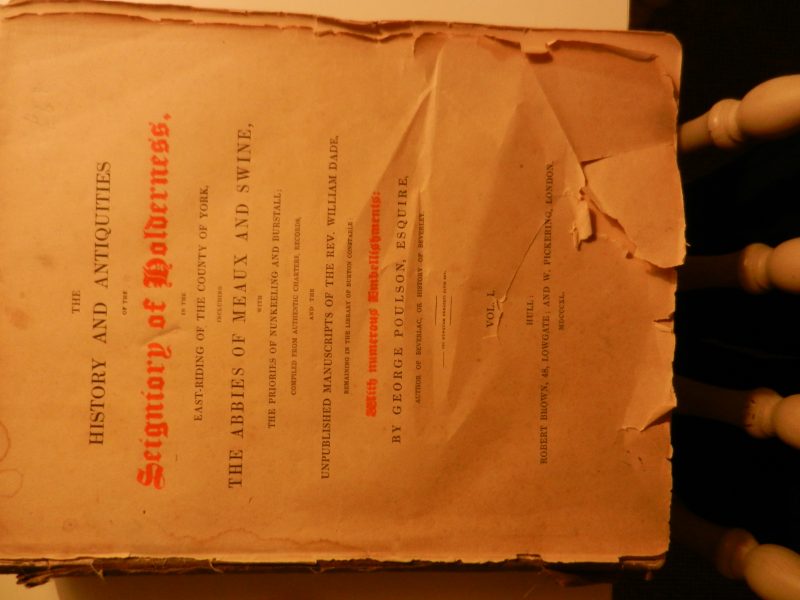 Two article projects suggested by myself for the annual newsletter of the East Yorkshire Local History Society are; (a) An analysis of George Poulson’s study of the parishes of Holderness as published in 1840, with particular reference to the parish of Hornsea, and (b) A comparison of the topography and economic development of South Ferriby and Kingston-upon-Hull (this may not be the exact final title). The idea behind the rather unlikely comparison in (b) is that in fact the two areas have an almost identical topography but have clearly developed in very contrasting ways, why?

I have a very very tatty copy of George Poulson’s History and Antiquities of the Seignory of Holderness in the East Riding of the County of York (see above), first published in 1840 which includes a list of the Patrons and Subscribers following the author’s preface. The half-dozen Patrons were headed by, the young, Queen Victoria and included the Archbishop of York. The long list of 353 subscribers was headed by 24 members of the gentry, of which five were Members of Parliament. Of the 353 26 were from the region that can now be called south Humberside, this not so surprising as a considerable proportion of the  coastline of the county of Lindsey faced the south coast of Holderness across the Humber Estuary, while 83 subscribers were recorded as having their (basic) addresses outside the Humberside region. That said, the most common address given for subscribers was ‘Hull’.

Poulson also credits eight libraries, four of Cambridge colleges, two of Oxford colleges, the ‘Hull (Lyceum) Library’ and the ‘Aldbrough Subscription Library’. Whether the directors of these were willing to provide a corporate subscription or whether they were relevant repositories, or both, is not clear to me.

Before Poulson embarked on his parish-by-parish history his Vol. 1 has about 160 pages of general notes on a succession of headings.

(the next blog will start with these).