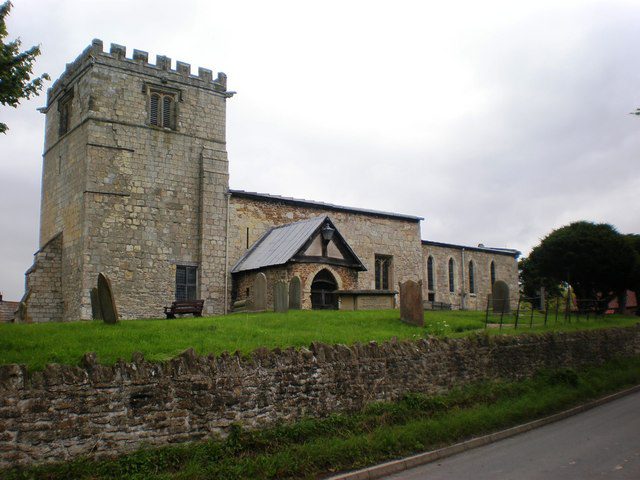 The photo above shows the church of All Hallows, Goodmanham as view from the village street from the south-west. Goodmanham is a small village just north-east of Market Weighton.

Continuing the Hudson Way public right of way – before dropping-down to Kiplingcotes station house (s.p.b.) fine views north are to be had looking across South Dalton Wold from a terraced section of the ex-line set into the side of Etton Wold. About half a mile further west, just after the Y.W.T. quarry (s.p.b.) the route enters Goodmanham Dale with chalk valley slopes on either side. In this area the scarp-slope of the Yorkshire Wolds is fragmented, more so than further south and further north. At one point the route crosses a minor road leading to Goodmanham, after which (west) the route follows alongside Mill Beck, a spring-fed stream flowing to the Vale of York. Mid-way along this stretch is the site of St. Helen’s Well, a spring in the hillside with historic significance.

Springs were often perceived as having religious significance, often with little surviving documentation. There is also the site of a St. Helen’s well in South Cave, this again, geographically a point on the spring-line of the Wolds. Their association with certain saints of the pre-Reformation is obscure (to me at least). The official generic name for such sites is Holy-wells and Sacred Springs. Other examples that come to mind in the Humberside region are St. Julian’s Wells in the parish of Anlaby, this being significant in the history of Hull’s water supplies, and a spring said to be a holy-well beside the scarp-top footpath between Alkborough and Burton Stather in North Lincolnshire (this being most unusually sited high up the scarp slope of the Lincolnshire Wolds overlooking the Vale of Trent.

Spring water was of course essential to life in ancient times, particularly so when the water had been filtered by the chalk porous bedrock.

St. Helen’s Well is in the parish of Goodmanham, about which more next time.