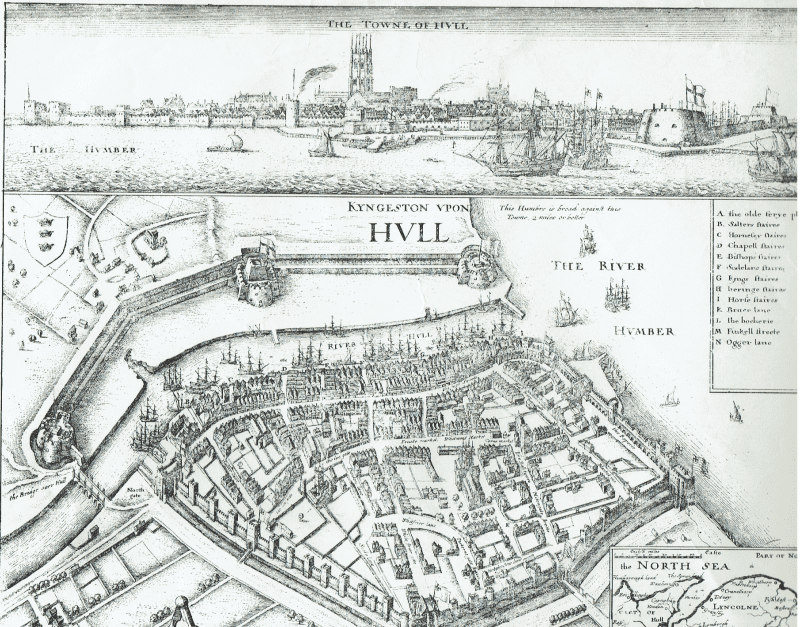 By the time of Thomas Baskerville’s description of Hull, late 1670s, there were already quite detailed plans of the town, particularly Hollar’s bird’s-eye view of 1641 (see above) – it therefore becomes possible to compare the two types of sources, text and illustration.

Like most topographers before him, Baskerville travelled to Hull from Beverley commenting on the floodplain land between the towns as ‘a forsaken country’ – possibly getting at bit confused as to his exact location as he states ‘by the sea large meadows full of grass, hay, and cattle, but backward in respect of us because of the cold clime and air from the sea’. Perhaps he had diverted south from Beverley and travelling along the Humber bank to Hull but this is unlikely as he then goes on to describe in detail Beverley Gate (centre-bottom on Hollar’s plan) through which he entered the town.

Feeling unwell Baskerville chose not to meet Hull’s governor Mr Cilby, but observed him attending Holy Trinity Church on Sunday accompanied by ‘a band of men’ who waited outside the church until the end of the service and then looked after the governor in the walk back to the inn where Baskerville was staying as the landlady put on ‘an ordinary’ every Sunday; this being like the service provided by a modern restaurant.

Baskerville also commented on the muddiness of the Humber but  correctly put this down to ‘the intermingling of tides with the river’s current’. As well as location Baskerville may also have been confused about direction ‘Upon the northern side of the town lies the haven’, but he does add mention of the chain put across the mouth of the River Hull ‘to keep out intruders’.

Thomas Baskerville does not get a slot in the Dictionary of National Biography, he was one of 16 sons to his more renowned father Hannibal Baskerville (antiquarian). Thomas’ wife was the daughter of one of Hannibal’s brothers!