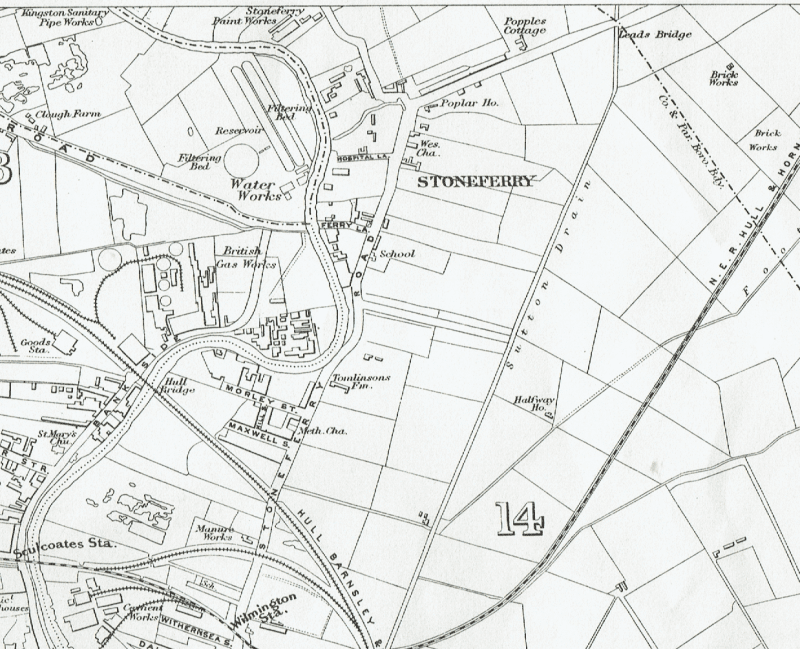 Above is the same map extract as on the previous blog.

The name Stoneferry would suggest, at first site, a simple origin, taking the two components at face value. Ferry, one of a number across the River Hull centuries ago, necessary as otherwise the River formed a barrier to regional trade between Holderness and the western half of the Hull flood-plain and the Wolds beyond. As previously stated, these would most likely have been rope, or chain, and raft ferries. For centuries there were only two bridges over the River, ‘North Bridge’ Hull (see blogs on Drypool) and one over a headwater feeder stream at North Frodingham. But why ‘stone’? The ferry could not have been made of stone, and what stone would have been moved on the ferry? It seems that the first recorded use of the word ‘stone’ in the place-name was in the 15th century, before that there were various records of the place-name with ‘stan’ as the first two syllables, but a meaning of this term does not seem clear.

There seems to be no record of a church at Stoneferry, a settlement that was, presumably, in the parish of Sutton (maybe Wawne, am not able to research this at present). Stoneferry would have been on the road that linked Drypool with the significant medieval settlement of Sutton, and with Hull once ‘North Bridge’ was first built in the 16th century (see Drypool blogs).

Bacon’s Plan of Hull (see above) shows that even by 1906 there was still no bridge over the River Hull linking Clough Road, Sculcoates/Newland with Ferry Lane, Stoneferry.

On the opposite side of the River Hull to Stoneferry in 1906 stood Hull’s Water Works – which I forgot to mention in my Newland section of blogs. The large-scale filtering beds and reservoir purified (or were meant to) water supply for Hull extracted from the River, this explaining why a road off the eastern end of Clough Road is called Reservoir Road, a name otherwise enigmatic. This was not Hull’s only source of water – as with most towns the history of Hull’s water supply is a story in itself. Ken. MacMahon in his History of Hull dealt well with the issue, including supplies from the spring-line of the Yorkshire Wolds.