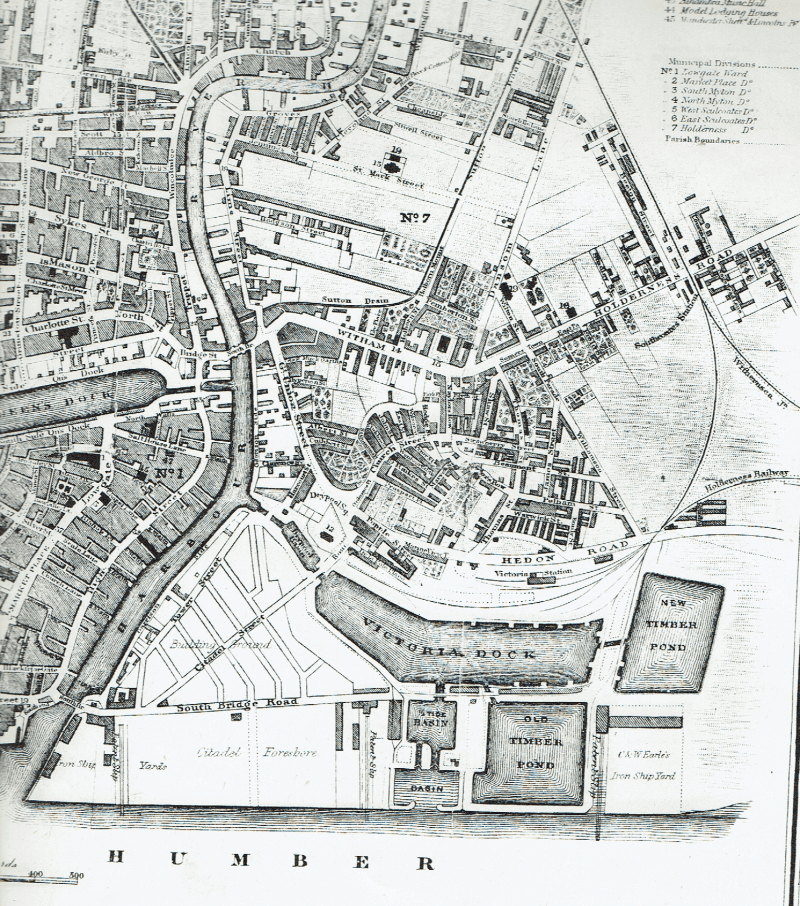 The map extract above is from Goodwill and Lawson’s Plan of Hull published 1869, a generation after their previous Plan (s.p.b.). The most dramatic impact on the Drypool area across those 27 years was the construction of Victoria Dock in the late 1840s and the destruction of the Citadel. As regards the latter development the feint writing on the map, ‘Building Ground’, shows that a grid for by-law house construction was complete ahead of any house building.

Following its excavation and construction Victoria Dock became Hull’s largest dock. Although initially accessed by a basin off the east side of the ‘Old Harbour’ (lower River Hull, this basin surviving just to the south of Drypool Bridge) it was soon given direct access from the Humber Estuary itself by the construction of the ‘Half Tide Basin’. Victoria Dock was Hull’s second dock to be accessed directly from the Humber Estuary and thus able to function independent of the Old Harbour, the first being Humber Dock (now the Marina) opened in 1809, the third was to be West Dock (Albert Dock) opened in 1869.

As regards the Citadel (s.p.b.) the site was sold-off in the early 1860s by the government agency the ‘Commissioners of Woods and Forests’ and there was a campaign by some local people for it to become a public park along the lines of Pearson Park being developed at the time. However, the Corporation failed to bid for the site. Had the Citadel been demolished two decades earlier Victoria Dock could have been much larger, as it was the dockside had to follow the shape of the Citadel’s perimeter wall.

Also seen on the extract above the Victoria Dock Railway gave access to Victoria Station and the shunting rails around the Dock. This line was an extension of the Hull-Selby rail-line and circled the town to avoid passing through built-up areas (as then).

Point of view 17 – Although having had no connection with the world of business the ‘lock-down’ has obviously been a terrible blow, particularly in the so-called Hospitality Sector. Given the Goon Show like raft of cans and cannots in the latest round of Government’s ‘freeing-ups’ many cafes etc. are going to the trouble and expense of making their premises user-friendly and as such they deserve support. One idea is to improve al-fresco possibilities, although this seems a little ambitious for October to March a canvas roof and out-door electric/gas heaters already allow some eateries in the Lake District, for example, to be available all year round.