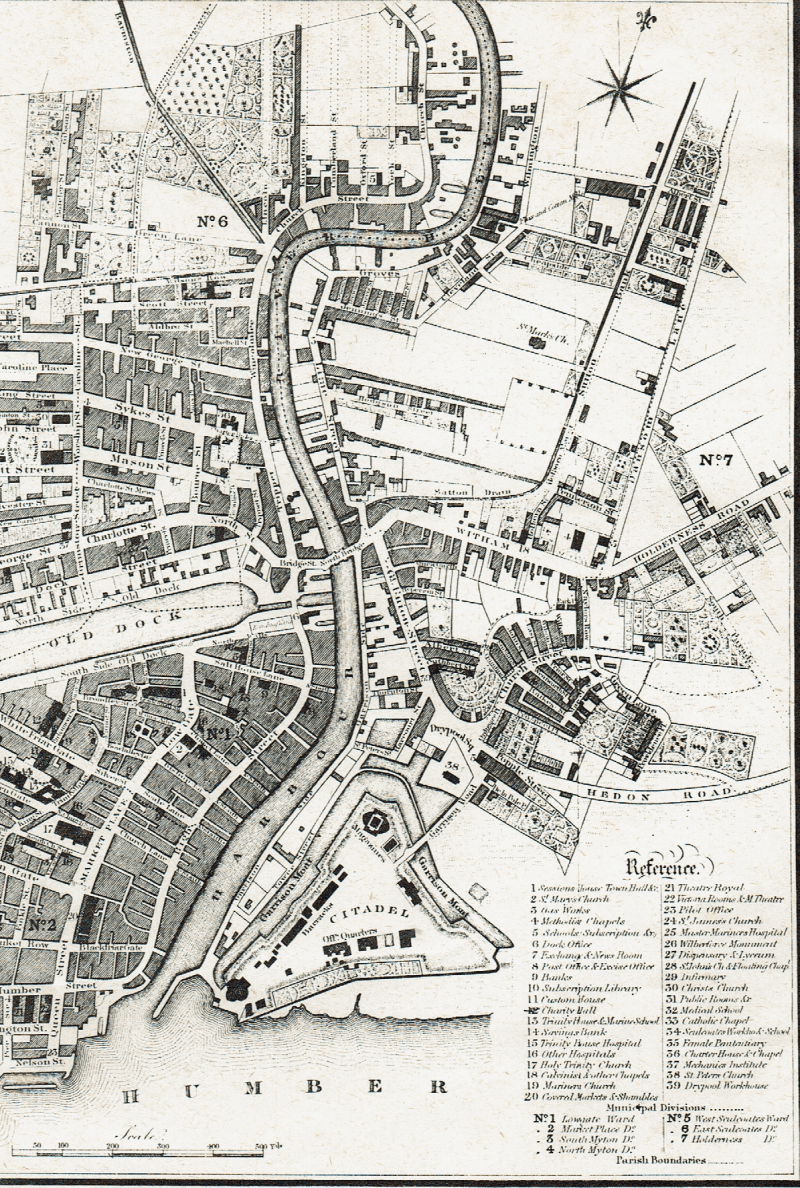 The map extract above is from Goodwill and Lawson’s Plan of Hull, 1842, and shows the extent of change across the Drypool area over the intervening years from 1817 (Cragg’s ‘plan’, s.p.b.s).

One interesting point is that Drypool retained its ‘village green’ (Drypool Square’) in the face of industrialisation and suburbanisation, this unlike Sculcoates and Newland.

Again, as in the development of Sculcoates (s.p.b.s), parts of Drypool are shown on Goodwill and Lawson’s plan as apparently being plots of parterre/formal gardens, again on the fringes of the built-up areas. Whether these were commercial ventures, open to the public sometimes with an entry fee to generate an income for the owner or whether some other explanation exists I am not sure. If my supposition is correct they must have been like proto-parks, like mini versions of the earlier Strawberry Fields, places of resort on the outer fringes of Hessle Road.

Clearly the number of residential developments and industrial sites had increased since 1817 (s.p.b.) but ribbon development aligned to the meanders of the lower River Hull and along Witham and  the west end of Holderness Road was still much in evidence.

North of Witham and still (1842) in one of Drypool’s remaining fields the site of St. Mark’s church is shown, this presumably ‘work in progress’ as David Neave records that it was consecrated in 1844 (Lost Churches and Chapels of Hull 1991, 58). St. Mark’s was built to serve this south-western part of Sutton parish (s.p.b. parish boundaries) ‘together with the extra-parochial area of Garrison Side’ (p.58 and s.p.b.). This area of Drypool became known as ‘the Groves’, a term considered before in connection with the development of the Sculcoates area. St. Mark’s was badly damaged by enemy bombing in the early 1940s and demolished in the late 1950s. It, and many more, serve as examples of the vast capital investment in building places of worship in Victorian and Edwardian Britain.

Point of view 16 – Animal rights charities and organisations around the World are campaigning against the export of live farm animals. Recently Animals Australia managed to get the government of Australia to ban live exports to the Middle East over the summer months. Now the government has granted an ‘exemption’ allowing 50,000 sheep to be exported to Kuwait in one ship in the Summer. As with slave ships in the past, a few tens of deaths from trampling, heat exhaustion or just giving-up life are collateral damage in the name of global ‘trade’. And anyway when they get there, if still alive, they will be killed by having their throats cut and dying of blood loss. And anyway its important to respect religious traditions. Some say.