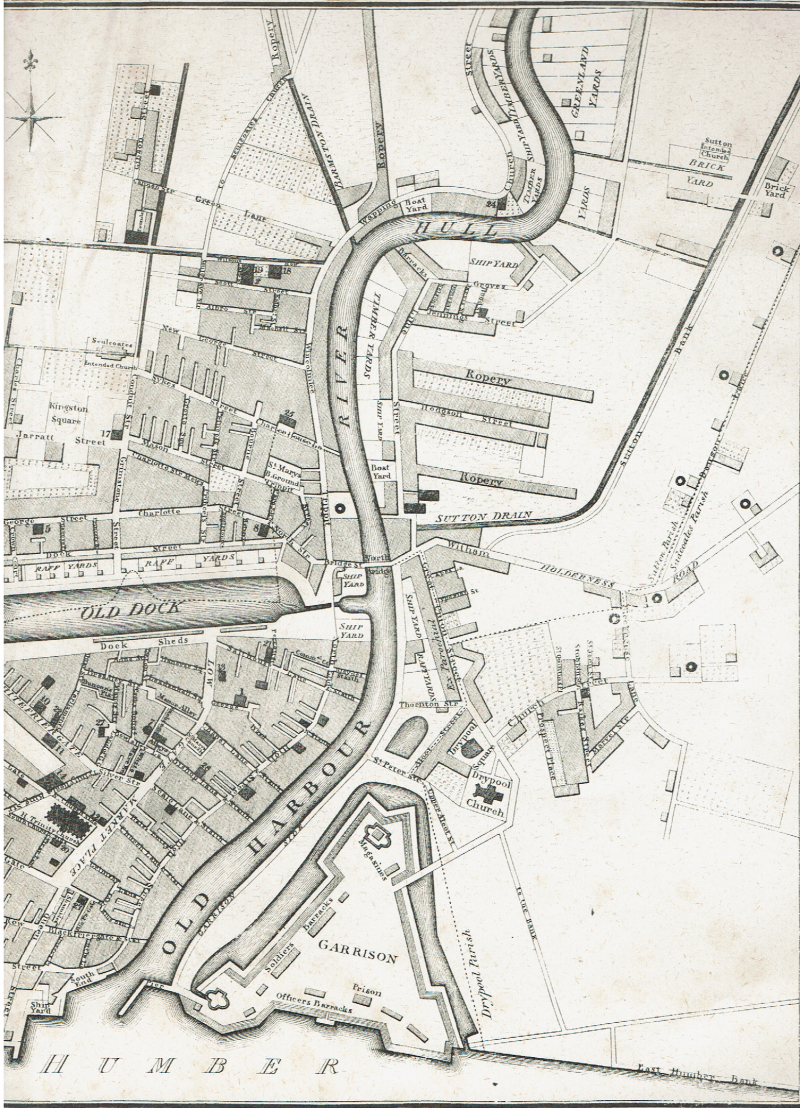 The map extract above repeats that from Cragg’s Plan of Hull, 1817, shown in the previous blog. Three further points from this extract invite attention; (a) Drypool’s parish boundary, (b) the ‘Yards’ of Drypool, (c) the mills of Drypool. I think it is fair to say that from the evidence shown on this map Drypool, by 1817, had become a suburb of Hull rather than an independent village.

(a) Close examination of the stippled parish boundary shows that the Garrison and area immediately north up to North Bridge was not in Drypool parish, whether it was in St. Mary’s, Lowgate of Holy Trinity, Hull is not clear. Indeed the term ‘extra parochial’ appears on the map north of Drypool Square but its significance is not clear.

Drypool parish was relatively small and Drypool’s residential and industrial growth north of North Bridge was in Sutton Parish, with part of ‘Sudcoates’ (Southcoates) parish shown in the north-east corner of the extract. Incidentally in the vicinity of the Sutton/Sudcoates parish boundary  seven mills (c) were sited (the round black dots with a white centre). Despite the word ‘mill’ being often used as an alternative to ‘factory’ maybe these were windmills, if so by 1817 they could well have been tower mills and being round in cross-section were given this symbol on the ‘Plan’. Assuming this to have been the case they were presumably corn grinding mills serving the rural area east of Drypool but conveniently near a main market.

(b) The ‘Yards’ of Drypool. From north to south the ‘Yards’ identified on the map extract are; Greenland Yards, Timber Yards (a number), Boat Yard, Ship Yards (3) and Raff Yard(?). Three of these are self-explanatory, Greenland Yard was where products from the whaling industry were produced while Raff yard I cannot explain, although the fact that it is next to a ship yard may hold a clue.