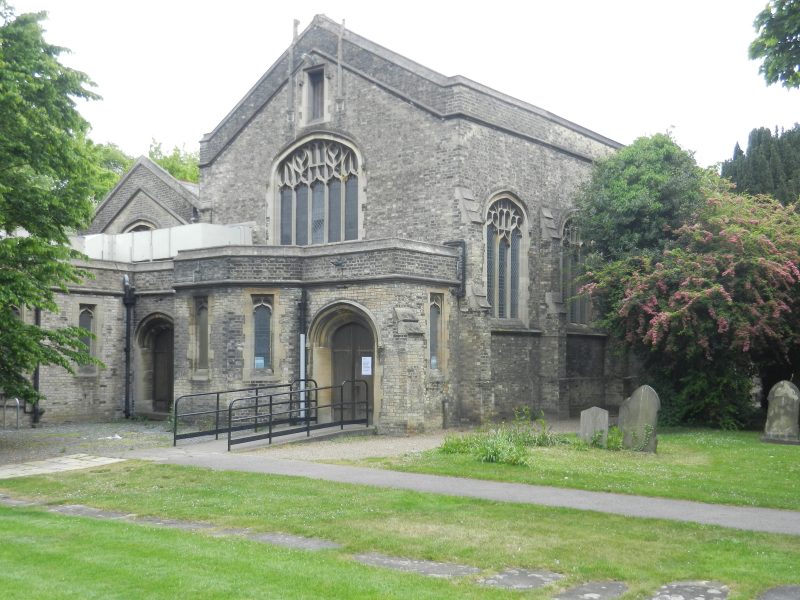 Yesterday’s blog included a photo of the Newland Community notice board on the corner of Clough Rd. and Beverley Rd. In need of t.l.c. but nevertheless an indication of the idea that once separate communities to the main town can, with some determination, retain some identity as, for example, do the spring-line settlements to the west and, probably the best example, as do the once detached communities in the greater London area. This retaining of identity hasn’t, in my opinion, been as successful in Hull although the City Council has tried. The current neighbourhood teams are good but their names don’t cross-reference with historic districts (or parishes) and, again in my opinion, this leads to confusion.

Today’s photo shows the west end of St. John’s church, Clough Road. One of the south wall windows from 1893 can be seen as can the baptistry, porch and north aisle (pitched roof) of the 1902 extensions (s.p.b.). The photo also shows part of the churchyard with its trees and shrubs which is a pleasure to see. If every opportunity was taken to ‘green-up’ every space then everyone would benefit.

The dedication of this church, St. John, is worth a comment. When meeting this dedication there are three options; (a) John the Evangelist, the writer (or maybe not) of the fourth, and ‘out-on-a-limb’, Gospel, (b) John the Baptist, an ‘itinerant Jewish preacher of the early 1st century’ and (c) John of Beverley, the 5th Anglian Archbishop of York who retired ‘in Deira wood’ and founded the first monastery on the site of the present Minster. The third is the least common but as well as the dedication for Beverley Minster it is also the dedication for the village church at Harpham on the Driffield to Bridlington road, said to have been John’s birthplace.

Dedications to John the Evangelist are relatively common (and I think this is the one for Newland), other churches in the region with the same dedication being, for example, Croxton, Brigg, Sewerby and Filey.