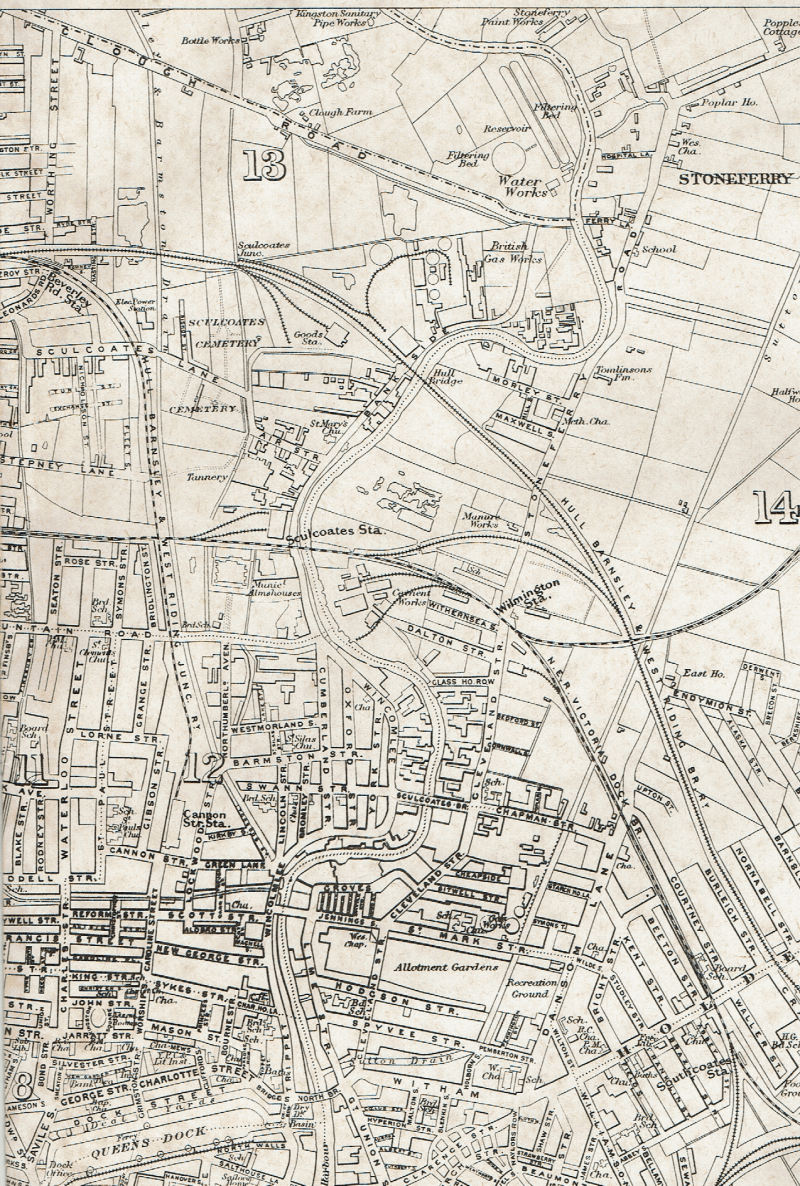 The last map extract I am using to show the development of Sculcoates from farming hamlet to part of an urban area is from G. W. Bacon’s ‘Plan of Hull’ produced in 1906 for inclusion in the Kelly’s Directory of the time. (With the History Centre being closed I am limited to the maps I have at home).

Sculcoates was now crossed west to east by two railway lines, the second being that of the Hull-Barnsley ‘high-level’ line leading to Alexandra Dock completed in 1885. This line is still occasionally used and crosses the River Hull by an impressive iron bridge built in the style of the Tyne Bridge. This bridge is hard to get a clear view of from the public highways being surrounded by industrial development.

The two detached cemeteries of St. Mary’s, Sculcoates Georgian church are clearly shown although the earlier one shown also on Goodwill and Lawson’s map of 1869 (s.p.b.) and on the south side of Sculcoates Lane is shown as no longer having the chapel building in its centre (this previously discussed in a blog and an illustration from Greenwood’s publication also scanned).

Northern Sculcoates parish was still (1906) characterised by fields and Clough Road still had fields on either side as well as clay diggings for the Kingston Sanitary Pipe Works. There was as yet no road bridge over the River Hull at its eastern end and, presumably, a ferry of some sort still crossed the River here.

Apart from a grid-plan of housing streets around Fountain Road east to the Victoria Dock Railway and Barmston Drain the extension of the housing areas that spread across the parish of Sculcoates was determined by developments either side of Beverley Road.

(This sub-section of the current theme to be concluded by one blog on Sculcoates today).

Point of view 9 – I think that on balance the government was right to allow time outside for exercise during the current ‘lock-down’. After a long winter it would have been a cruel fate to not have been able to access at all what has been a warm, dry spring. Given this, a more rigid lock-down as in Italy and Spain would have generated unhappiness even unrest.

There has however been a big issue about poor supplies of ‘tests’ that seemed to exist much more elsewhere.

The B.B.C. has really risen to the challenge and has provided a lot of programmes to support families at home, although the ‘lets be jolly come what may’ culture required of some presenters ‘grates’.