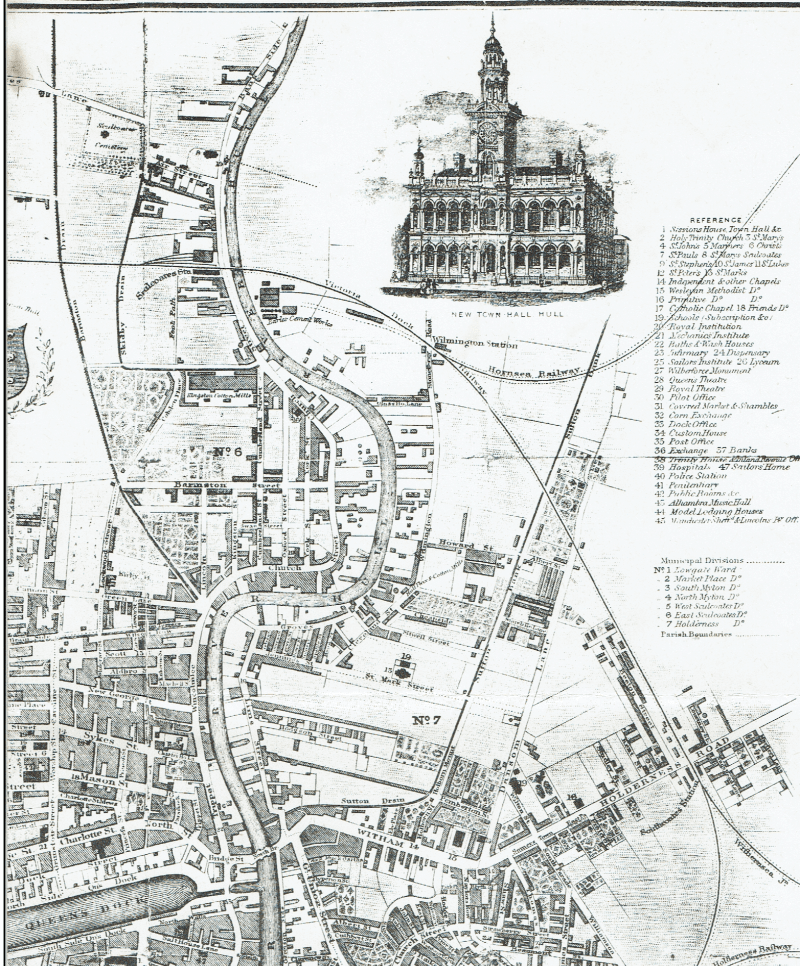 The map extract above covers much of Sculcoates parish and is taken from Goodwill and Lawson’s second ‘Plan of Hull’ published 1869. The extension of the built environment through Sculcoates was still dominated by industrial development snaking beside the meanders of the lower River Hull.

The largest industrial building shown was that of the Kingston Cotton Mills (left upper centre). Analysing the information gleaned from the 1851 national census (the first to show an equal proportion of the national population living in rural and urban areas) Ken. MacMahon writes that over 2000 persons in Hull described themselves as cotton operatives (A History of Hull p.318). This surprising development in Hull’s industrial profile, given that the raw cotton came across the Atlantic Ocean not the German Ocean (North Sea), resulted in a large influx of workers and their families from Lancashire, a section of the town’s workforce that the Hull Advertiser at the time described as having ‘mental grossness and darkness as to spiritual things’. The American Civil War, 1861-1865, interrupted the supply of raw cotton to Hull with resulting high unemployment and deprivation in the town. Zacharia Pearson was mayor of Hull at this time and had donated land for the creation of Hull’s first ‘People’s Park’ (later Pearson Park), he was bankrupted by a forlorn attempt to break the blockade of southern states ports in America so that cotton could be again shipped to Hull to relieve social distress there.

Sculcoates was also now (1869) crossed by a railway, the Victoria Dock Railway and Sculcoates station (see above), nothing of which survives. However, the iron railway bridge over the River Hull does survive which now supports a footpath. At Wilmington station (see above) a spur railway continued to Hornsea, this resulting in some high status residential building around the park in Hornsea often housing Hull industrialist commuters.

The building shown top-right is Cuthbert Brodrick’s Italianate town hall completed in 1864 on the site now occupied by the Guildhall (east end), this part of the town centre improvements of the early 20th century. The cupola at the top of the lofty clock tower, as previously discussed, now stands on a mound at the west side of Pearson Park. Progress on the improvements to Pearson Park (s.p.b.s) have come to a standstill since late March with the Covid 19 lockdown so all plans for official opening etc. are now in the air.