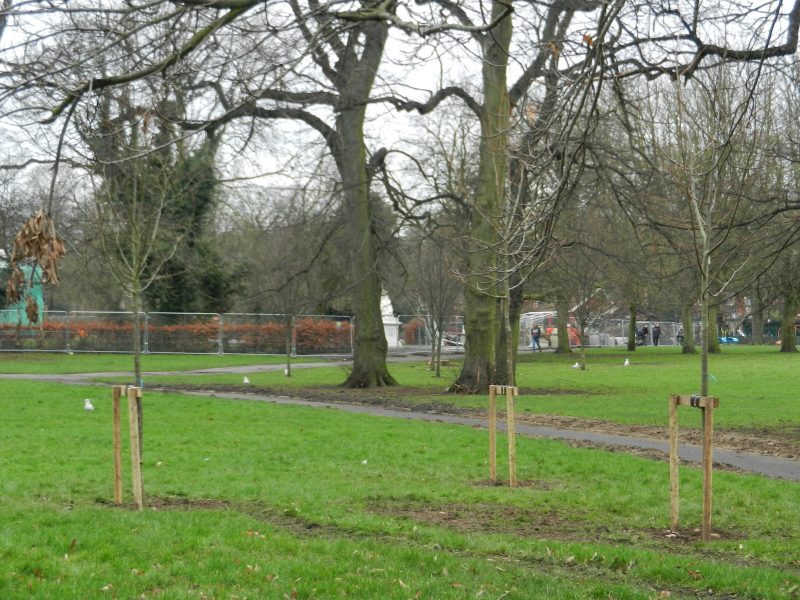 I have no official answer but wondered if it might have reflected the emblem of Hull Corporation, three crowns vertically, one above the other. There seems to be no definitive answer as to why this should have been the town’s emblem but its use seems to go back at least to early modern times, 16th/17th centuries. There is an interesting information board at Hull History Centre which speculates on this question, it currently stands behind the counter where light refreshments are served. Part of the answer, it seems, hinges on whether the three images are in fact crowns or coronets. The Shorter Oxford English Dictionary defines coronet as ‘a small or inferior crown, a crown denoting a dignity inferior to that of the sovereign’. The issue remains a mystery.

Finally, it surely is not good to plant what will be (hopefully) large deciduous trees so close together. Trees have a vast network of roots and if too close these root systems will be competing for the same resources to the detriment of all. When parishes were enclosed by Parliamentary Enclosure in the century or so after 1750 young trees were planted in the newly created hedgerows averaging three to every 100 yards of hedge – 30+ yards apart. Nevertheless, some of the mature groups of three trees in the Park seem to have done ok.