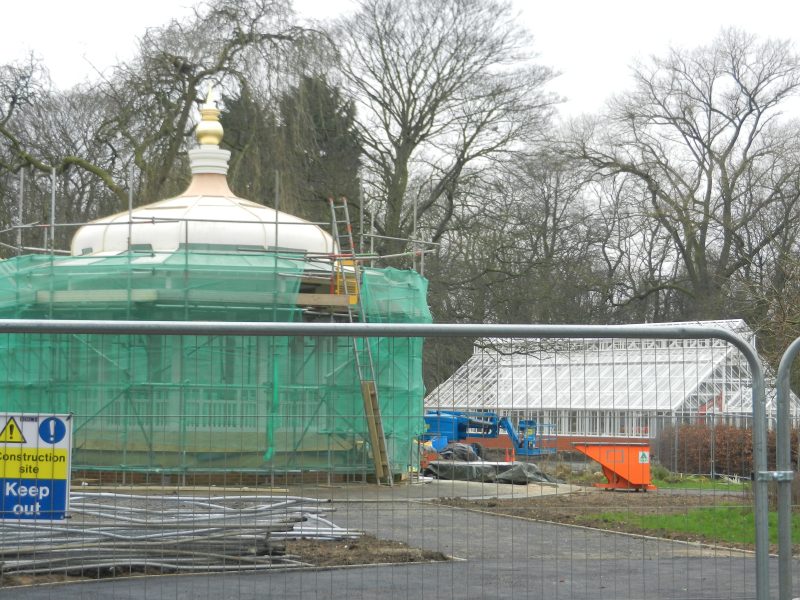 The photo. above shows one area of the ongoing upgrading of facilities at Pearson Park, Hull. The new conservatory in the background appears to be nearing completion as is the new footbridge over the curving linear pond, just off picture to the right.

The new bandstand is emerging beyond the scaffolding and sheeting and the semi-domed roof with its central orb and pinnacle, both gold painted, is now completed. Thus the latest heavenward projection in the locality is now visible.

In conclusion most of these uppermost projections, cupola, pinnacles, turrets and spires were created for decorative purposes although sometimes they were given a practical purpose (s.p.b.s). The examples written about over the last nine blogs were all created in a relatively narrow time-span, basically 1870s to 1910, other examples in the town also sit in this timescale. Mostly, but not exclusively, they were embellishments to public buildings and exampled the level of investment being devoted to these buildings and to their public function(s) at that time.

Given some uncertainty as to whether ‘cluster’ is the proper collective noun for cupola and the like, nevertheless other clusters exist, the obvious one being those around Queen Victoria Square in the town centre. The single dome of the City Hall (1903-1909) is topped by a cupola, at the corner of Savile Street and Cross Street stands the former Yorkshire Penny Bank building (c.1900) with a two-tier cupola on top of its corner turret and the Town Docks Museum (formerly Dock Offices and now called the Maritime Museum, currently closed for three years for refurbishment!!) (1867-1871) has three domes topped by what David Neave (s.p.b.s) calls ‘lanterns’ (p.519).

To find more we need to remember the old rule ‘look up’, although some attention to ground level may help when approaching road junctions.