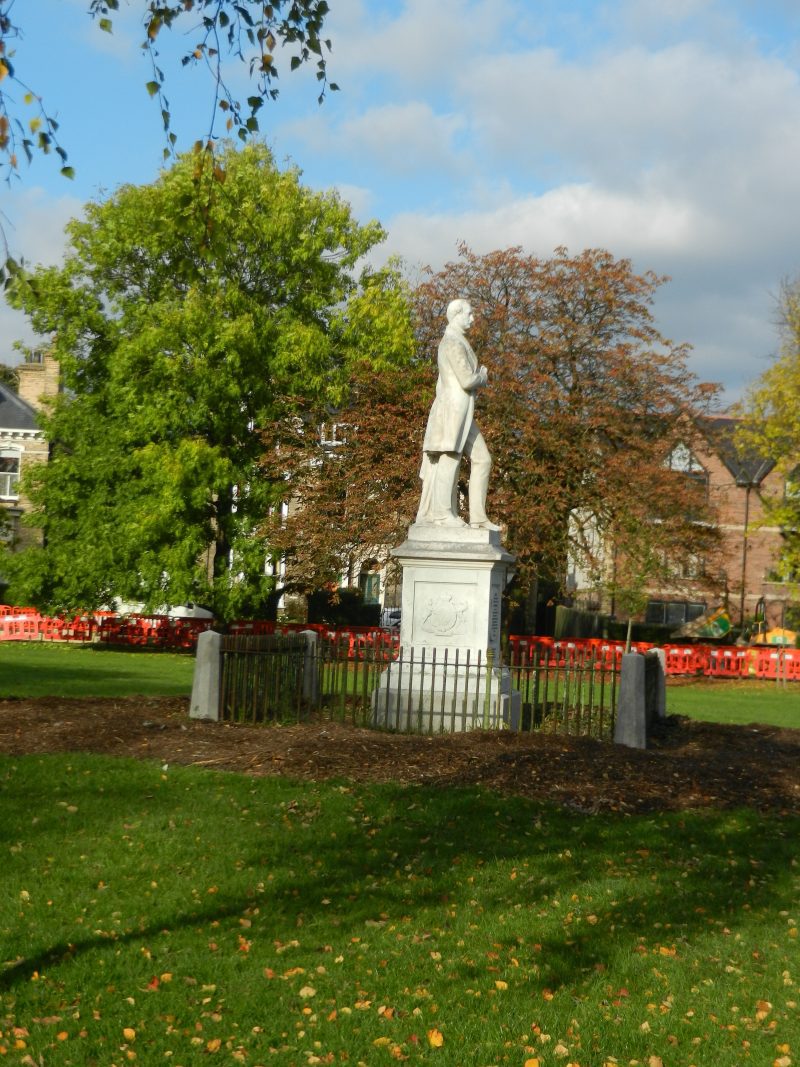 The final element of the Pearson Park Restoration Scheme as listed on the public information board (s.p.b.s) is ‘Refurbishment of statues and memorials around the Park including Queen Victoria and Prince Albert statues and the drinking fountain’. From the outset I have to admit that I am no fan of statues – they make ‘great’ individuals (usually dead) who future generations may, on the basis of further evidence or changing attitudes, think less highly of – witness present disputes about statues of colonial dignitaries (Queen Victoria was given title of ‘Empress of India’ at a time when the ‘sun never set on the British Empire’). Another tendency with statues was for the sculptor to make the figure appear grand more than to be realistic.

This was achieved by Earle (a well known local Victorian sculptor who, I presume, created these two statues) by showing Prince Albert in a statesman-like pose and with a hair-style like that of a Roman emperor which, from the evidence of an early portrait photograph dated 1860 (one year before his death), he did not have. Queen Victoria is portrayed with a mass of flowing garments, her face possibly ‘youthful’ for someone in their late 40s but the real give-away is the fact that the sculpture shows her seated in a chair typical of those seen in Roman mosaics – a beautiful empress. Minutes of the Parks and Cemeteries Committee of the Municipal Council from the early 20th century record that at one point the Queen (statue) ‘lost’ two fingers. Problems with acquiring a matching marble resulted in the whole hand having to be replaced – which hand is not recorded.

Albert and Victoria were married in 1839 two years after she had become queen. They visited Hull on a state visit in the 1850s, Paragon station hotel afterwards becoming the Royal Station Hotel. Pearson Park had not been established at that point. Albert died in 1861, Victoria in 1901.