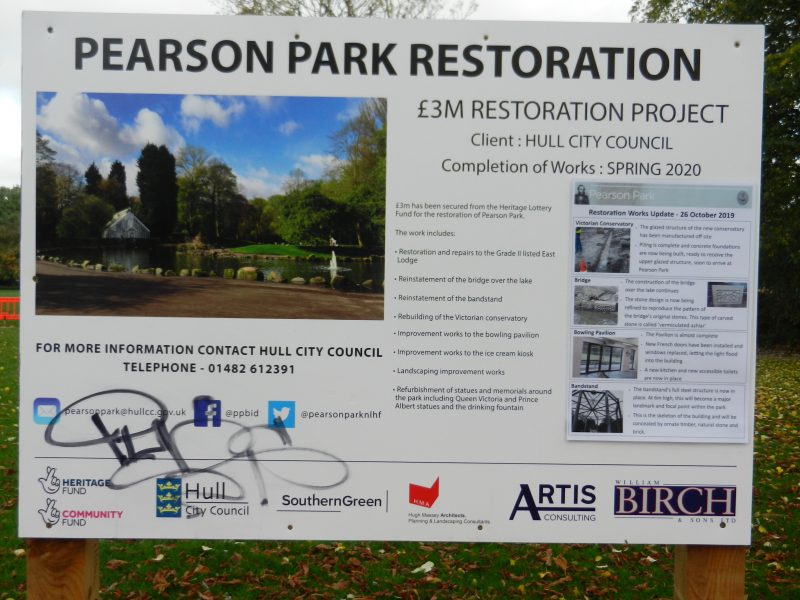 The photo. above shows one of the information boards for the above Scheme. Each of the above elements of the Project is progressing rapidly, this despite the extremely wet weather this Autumn especially earlier this week which has left much of the Park a shallow lake and which caused severe flooding in the River Don valley and other parts of South Yorkshire. The projects listed are;

-Restoration and repairs to Grade II listed East Lodge (lodges were houses built on site for the senior work-person and their family, they went with the job, often in the case of Hull rent-free, but had to be vacated if the employee lost his job or moved to another job. East Lodge was built in a mock-gothic style).

-Re-instatement of bridge over the lake (this at the narrowest point of the serpentine ornamental lake. These features had become a typical feature of municipal parks by the end of the 19th century but the one at Pearson Park was an early example. Later park bridges were often built in an Oriental style to reflect a fad of the time, I don’t think this was the case at Pearson Park. The ornamental lake at Pearson Park was cement-lined which made it relatively easy to clean once drained – all ornamental lakes needed an impervious base, often ‘puddled clay’ being used. The restoration of the Beck at Barton on Humber required a specific impervious clay be brought to the site to be laid as a ‘liner’).

-Re-instatement of bandstand (bandstands from ‘day-one’  became an iconic feature of late-Victorian municipal parks, the reason being that playing in a brass or silver band was a very popular and much encouraged pastime. By the early 20th century municipal park authorities were getting many requests in early spring from local bands wishing to give public concerts, often of ‘sacred music’. The bands hoped to raise money but the methods available were strictly regulated by park authorities, one permitted was ‘a sheet’).