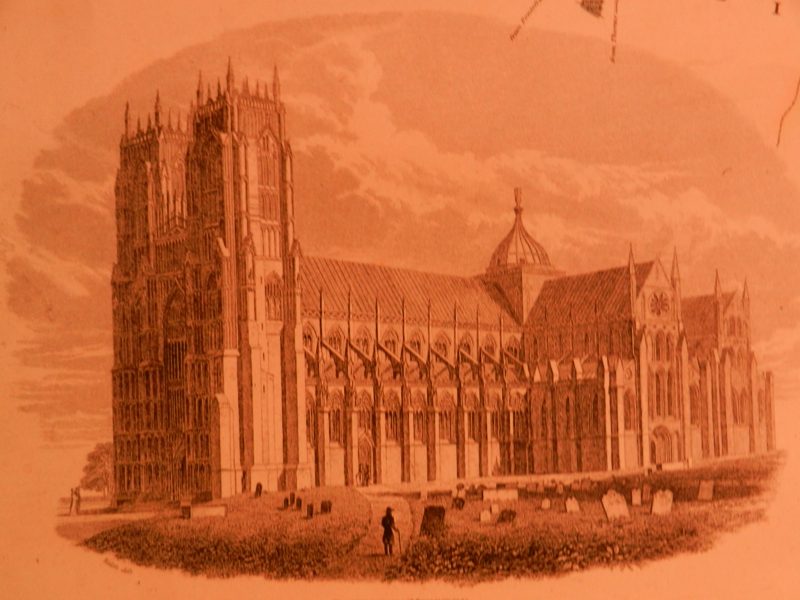 The image of Beverley Minster included on Bowen’s county map of 1832 (see above) is interesting in that it shows the Minster as might be seen today from the Beverley end of Long Lane, a majestic building the product of a two-hundred year east to west building programme spanning the three main eras of Gothic architecture. However one feature shown but not there today is the cupola sitting on the top of the crossing tower. This was approximately one hundred years old when portrayed in 1832 being possibly the only external evidence of the Georgian restoration of the church carried-out between 1716 and 1769, the initial plans being drawn-up by Nicholas Hawksmoor with the early work-programme overseen by William Thornton.

The representation of Beverley Minster from a similar angle and dated 1656 shows that the cupola replaced an earlier elegant octagonal lantern-tower that may have dated from the 15th century (see one similar surviving at All Saints church in the centre of York). A lantern tower was just that, a structure in which a fire was lit in a brazier burning wood, brash or coal and having the function of an inland lighthouse.

A guide-booklet for the Minster reprinted in 1997 lists some facts about the Georgian restoration – 400 people, including women and children, were employed (for the majority of these there would have been no contract of employment, paid daily and with a virtual shut-down of the building programme during the winter). Daily wages ranged from two to three shillings for master masons to two to four pence for children.

There was much more evidence of the Georgian restoration inside the Minster to create an ‘auditory church’. When features of the Georgian restoration were removed as part of the ‘Gothic Revival’  beginning in the 1820s one removed feature, two fluted columns supporting an entablature, were taken to New Hall, Barton on Humber to create an open porch as may be seen today. Presumably an unusual cargo for the Hessle to Barton ferry (my work on the History of Humber Crossings has yet to be written-up).

For the time being this is as much as I will write about the County maps of East Yorkshire.