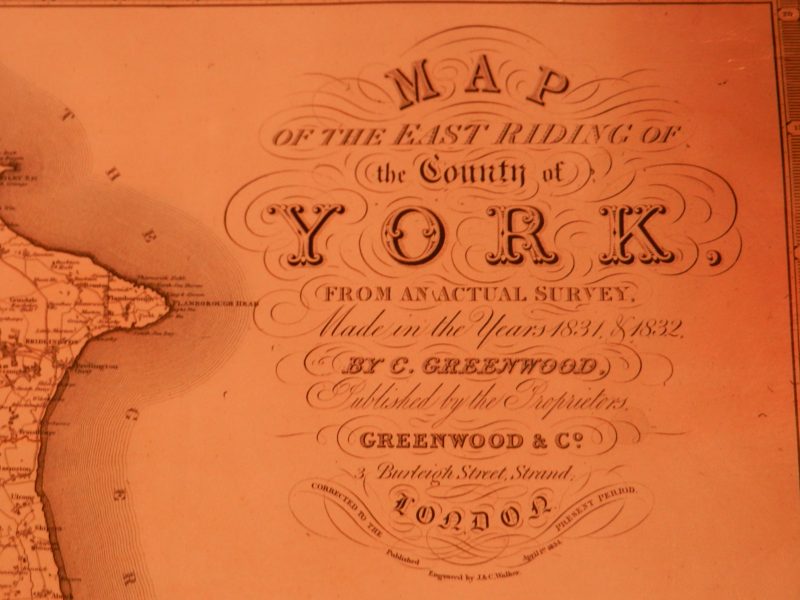 The picture above is of the top right-hand corner of Greenwood’s map (s.p.b.s) and forms the title credit. The bit of the map visible shows Flamborough Head, and immediately south the fact that Bridlington (Burlington) and Bridlington Quay were then (1832) still quite separate settlements.

Despite some features on the map being indistinct two elements are made very clear – borough boundaries and private parks. The former shows that the eastern boundary of Beverley borough was the River Hull with the western boundary stretching out beyond the Westwood and the southern boundary extending beyond Woodmansey and Thearne. Hull’s borough boundary had by then incorporated Sculcoates but not Cottingham Common or Stoneferry. To the east Drypool and Summergangs had been incorporated and to the west the Myton area (formerly of Hessle Common), (see A History of Hessle Common (now south-west Hull) in the Publications and Articles section of this website).

Private parklands are shown clearly in a bright green colour. This county map is particularly useful to the landscape historian as ‘Heaths, Commons and open roads’ and ‘woods’ are also fairly clearly shown. For example around Market Weighton the private parklands of Londesbrough Hall, Everingham Hall and Holme on Spalding Moor Hall (named on the map as just ‘Holme’), the ‘woods’ of North Cliffe (along the scarp slope looking out to Wallingfen) and the ‘heaths’ north-west of North Cave and west of ‘Holme’ are all shown clearly.

In Holderness the private parklands of Winestead Hall and White Hall, Rise and Burton Constable are shown as are a large area of heathland south of Nunkeeling, an area north of Leven and a linear area inland from Mappleton. Unsurprisingly, given its density of rural population throughout the Middle Ages, no large are of ‘woods’ is shown in Holderness.

In Barton two areas of private parklands are shown for Baysgarth House and Kingswood, nearby Barrow Hall also had an extensive parkland.