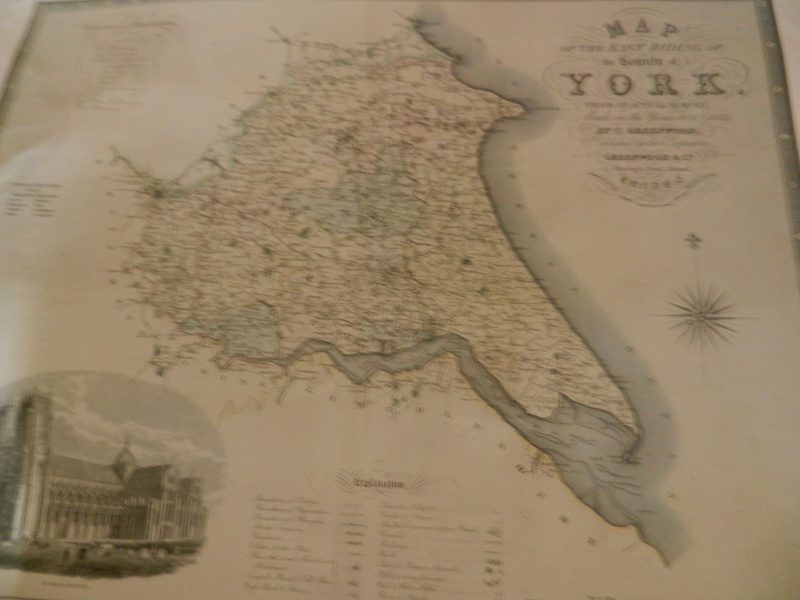 Greenwood’s map is the last of those listed in the blog of 28th August last. Christopher Greenwood (1786-1855) was a London publisher who compiled and published maps of most of the counties of England. Quoting from the notes on the back  of a print of this map, along with other East Yorkshire county maps published by the University of Hull in 1990, ‘He (C. Greenwood) founded the firm (map-making business) in Yorkshire (having been brought-up in the West Riding) and guided its expansion to London. The idea of an atlas of large-scale county maps was his and he directed the work of the surveys, the collection of secondary data and their compilation into map form’. Greenwood’s map was engraved by J. and C. Walker (masters of their trade) and includes in the lower left-hand corner a contemporary print of Beverley Minster (part showing on the image above). It also includes a more detailed ‘Explanation’ (key) of 20 symbols (alongside the print of the Minster, see above) making this map much-like the Ordnance Survey one inch to one mile First Series being surveyed at the same time. The elaborate credit in the top right-hand corner (see part above) states that the map was first published on April 1st, 1834 and that it was the result of an ‘actual survey’ conducted in 1831-’32, also giving Greenwood and Co. address as Burleigh St., off the Strand, London, a street which still exists near Covent Garden.

Greenwood’s map incorporates feint colours, although (to me) their purpose is unclear, Hull and Hullshire, for example, having the same light-blue colour as the area between South Dalton and Great Driffield. Also it is not easy to distinguish between roads and rivers (the course of the River Hull being an exception) although ‘parks and pleasure grounds’ are clearly portrayed. Again Greenwood shows some detail for the south-bank of the Humber Estuary, north riding of Lincolshire, this respecting the connections between both banks. The details of roads, settlements and the like on the south bank show great accuracy, Greenwood’s workforce must have surveyed this linear area also.