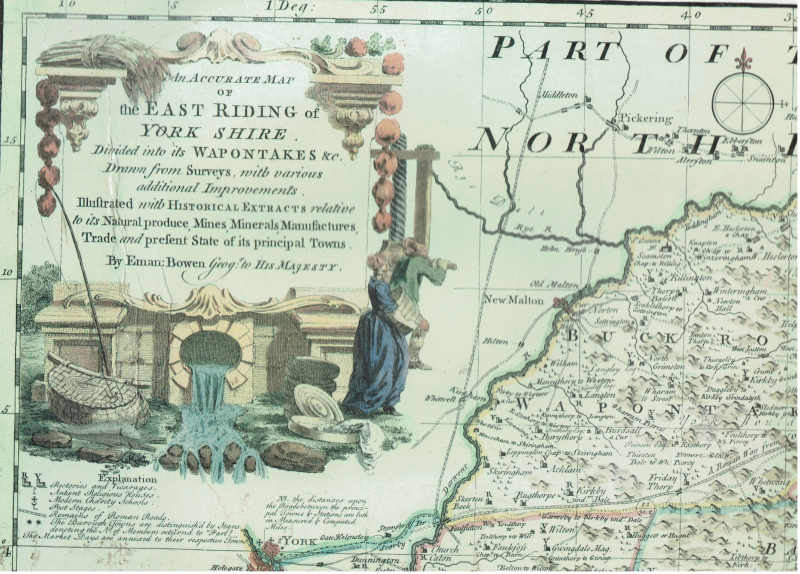 Emanuel Bowen’s county map of East Yorkshire is well known for a number of reasons; it is detailed (for a county map) and is very elaborate – incorporating the image shown above and a fine panorama of Hull’s townscape as viewed from the Humber Estuary. I am not sure when this map was first published but Bowen was not long-lived, 1720 – 1767. Bowen was an engraver and publisher based in London and was appointed Engraver of Maps by George II. In the bottom left hand corner of the map are the words ‘To the Noble and Right Honorable  Arthur Ingram Viscount Irwin Lord Lieutenant of the East Riding of Yorkshire. This map is dedicated by his Lordship’s most obedient humble servant Eman: Bowen’, despite this deferential tone Bowen presumably had a workforce of surveyors as he produced other county maps also. Incidentally Bowen’s map is contemporary with the early surge of Parliamentary parish enclosures across eastern England and the Midlands so the surveying techniques and implements used by enclosure surveyors would also have been used in the research needed before a county map was produced.

The illustration that decorates the title (see above) is curious. Spilling-out from the mouth of the built structure appears to be the contents of a sewer or a culverted stream (on to a beach?). The built structure is ‘classical’ in style. To the left of the orifice lies a wicker fish trap with a couple of pike-like fish (fresh water fish) lying alongside. To the right a lady with a wicker basket watches a man working a very large cheese press. Is this image allegorical, informative or artistic license?

In the top right-hand corner of Bowen’s map is a smaller copy of the main map, apparently to make clear its ‘several divisions’ (wapontakes – s.p.b.s), this odd because the wapontake names and boundaries are clearly shown on the main map.