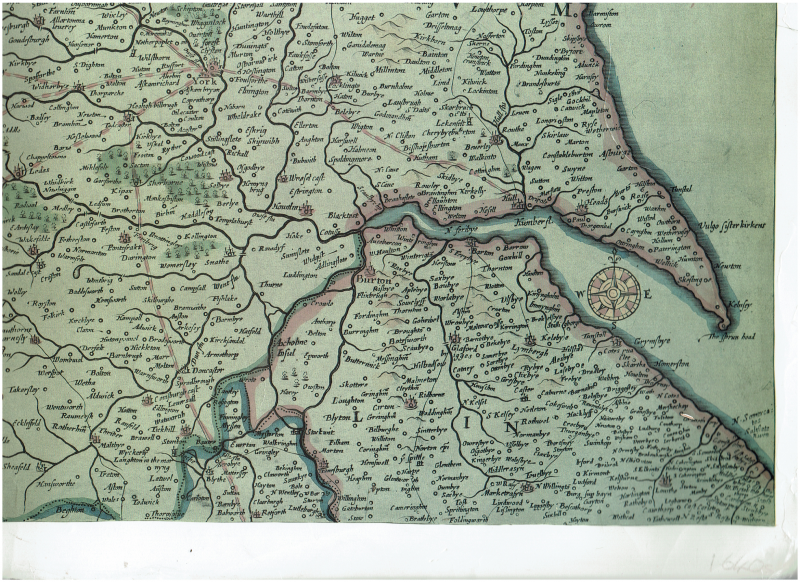 The third map being considered (see above) was compiled by Wenceslaus Hollar (well known in this area for his engraving showing a bird’s-eye view of Hull, 1640), probably in the 1640s and, allegedly, produced on the orders of Oliver Cromwell during the English Civil Wars. It is entitled ‘The Bishop=ricke of Durram and Cumberland, Westmoreland, Yorke=shire, Lancast=shire, and parte of Linconshire’. In covering much of northern England the detail in East Yorkshire is compromised. Communities are shown by little circles plus a stylised symbol of a cluster of houses to denote the larger communities at Hull, Hedon, Howden, Bridlington, Beverley, Pocklington and Kilham in the East Riding. Rivers are located very prominently but, like in the two previous county maps (s.p.b.s), higher land, i.e. the Yorkshire Wolds, is only casually identified by hill symbols in the highest areas of the Wolds. Again, coastal features lack precision with Flamborough Head having a strange shape and no mudflats or reference to Sunk Island shown in the Humber Estuary.

Principal roads are shown on the map but these would still have been maintained by the system of parish responsibility created under Tudor legislation, and pre-date the development of turnpikes. The only principal road shown in East Yorkshire is that between Hull and York and passing through Cottingham before crossing the southern Wolds to Hotham and Bishop Burton and on across the Vale of York south of Pocklington. No large woodland areas are located in East Yorkshire such as those identified south and north of York, south of Leeds and on Tees-side. On Humberside it seems to have been the first map to have distinguished between the two Ferribys by the terms ‘North’ and ‘South’.