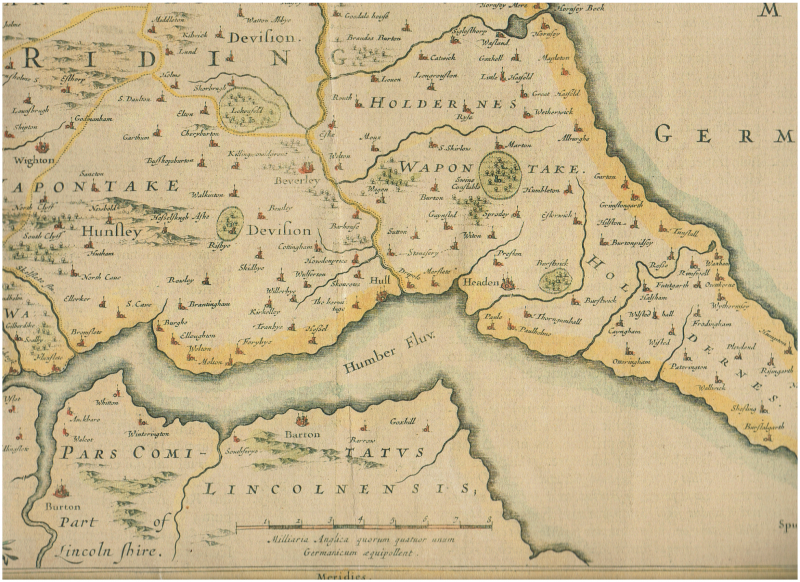 One interesting feature of our mid 17th century county map (s.p.b.s) is that it records and gives the boundaries of the ‘wapontakes’ of the Eat Riding. The six so defined are; Dickering W. (north-east section of the Wolds), Holderness W., Buckrose W. (north-central section of the Wolds), Harthill W. (southern Wolds and the River Hull Valley, by far the largest W. and thus divided into ‘divisions’ – Bainton D., Huntley D., Holme D. and Wilton D.), Howden W. and Ouse and Derwent W. Wapontakes were subdivisions of certain English shires including Yorkshire and Lincolnshire, they were equivalent to the ‘hundreds’ of other English counties, that was a subdivision having its own court. In the middle ages and early modern eras justices of the peace would have administered the law in their wapontakes/hundreds.

As with all sources of historical evidence the reliability of the evidence needs to be considered. For example the map extract above shows that although the cartographer chooses to identify communities by church symbols these are stylised and do not correspond with what is known of these buildings in the 17th century. Also Hull is shown detached from the lower part and mouth of the River Hull (in fact this curiously corresponds with an idea promoted by certain local historians of the late 19th and early 20th centuries that early Hull developed west of the current ‘Old Town’ beside Limekiln stream this being then the mouth of the River Hull – but the current course of the lower River and the development of Hull on the west bank happened long before the 17th century.

The map’s terms for the North Sea are interesting – ‘The Germain Ocean’ and below the latin ‘Mare Germanicum’. Off the coastline of south Holderness the terms ‘Belgis’ and ‘De Noordzee’ are written. The term German Ocean was certainly out of favour and the term North Sea in favour by the Great War.