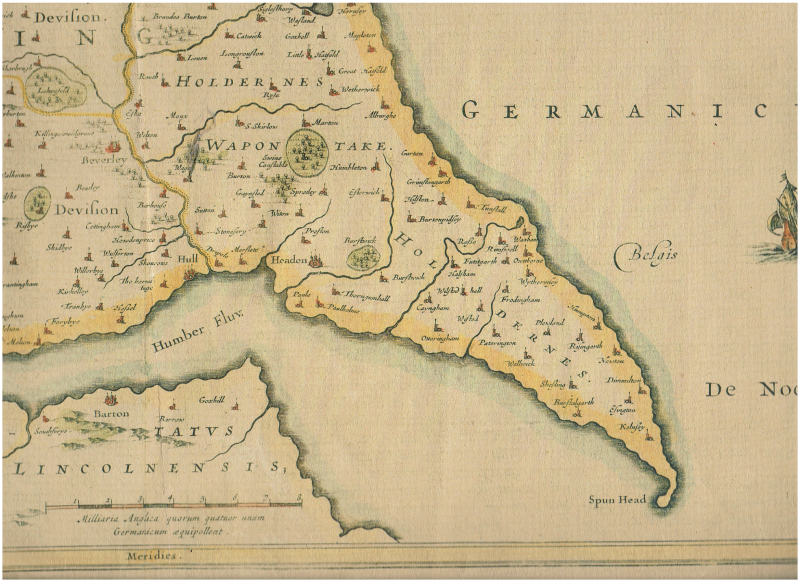 28th August, 2019 County maps of the East Riding of Yorkshire,

The first Ordnance Survey (O.S.) maps were published in 1801 for the county of Kent and to the scale of 1 inch to 1 mile. This continued to be the bedrock scale for O.S. maps sold to the public until the onset of decimalisation almost two centuries later. The First Series of these O.S, maps was not completed until 1891 despite 6 inch to one mile maps being pioneered in the 1840s and 25 inch to one mile maps existing from 1860s onwards. By the late 1820s one-third of England and Wales had been mapped to the one inch scale, this including north Lindsey (Lincolnshire).

In the 1840s the O.S. began producing county maps to the scale of six inches to one mile. County maps had ancestors (not O.S. maps) going back over two-and-a-half centuries. The East Riding’s archive repository (the Treasure House, Beverley) has a full collection of these pre-O.S. county maps. I have copies of five such county maps;

By comparing the same area/feature across a series of county maps some interesting historical evidence can be unearthed.

Incidentally county maps, particularly later ones, often had very instructive illustrations around the edges of the county boundary. For example, Greenwood’s county map incorporates, bottom left, a very detailed illustration of Beverley Minster church, obviously contemporary with the map. This being so the illustration shows clearly the cupola that then rested on the roof of the crossing tower, this particular classical feature now long-gone. However, the illustration does not show the original grammar school building which once existed in the south-west corner of the churchyard. I am not sure of the school’s dates and my reference books are now all boxed-up as I was expecting to move on 30th Aug. but it has now had to be postponed for a very depressing reason.