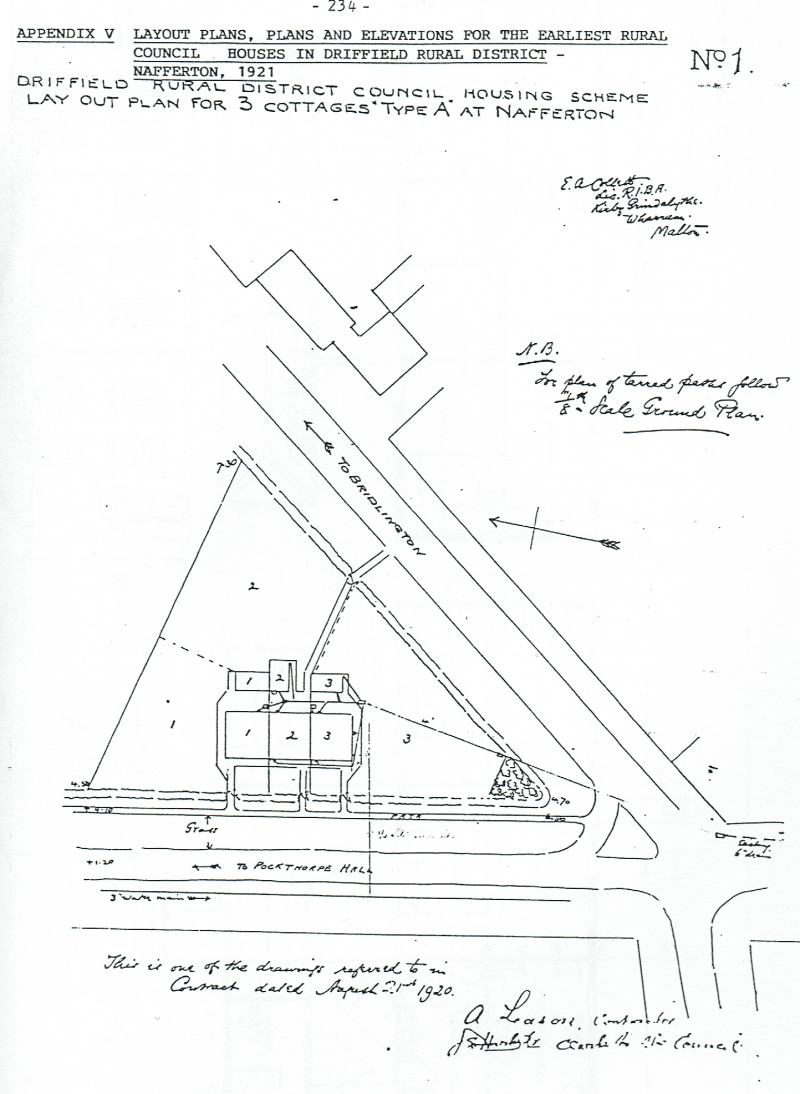 The above primary source is taken from p.234 of Housing for the Rural Working Classes of East Yorkshire in the late 19th century and the Development of Early Rural Council Housing to 1939 (see Articles and Publications) and shows the layout plan for the earliest rural council houses in Driffield Rural District at Nafferton, 1921 (surviving). The quarter-acre gardens were typical of the immediate post-Great War council houses. Although the Sunk Island Colony cottages were earlier than these both reflected the rising public-health standards for working class housing – large gardens to occupy the man of the house and to supplement the household food supply, three bedrooms enabling growing children of the two sexes to have separate sleeping accommodation and light and airy inside, factors not lost on the Hull Times reporter who visited Sunk Island in September, 1918 when, having studied the houses, he recorded ‘Now you see how the Government intend to house the men broken in the War’ (this in fact a myth s.p.b.).

The reporter also discovered that rather than the 50 acre plots allocated to demobilised soldiers as originally planned in fact the colony was then run as an ‘industrial farm’ with the ex-soldiers being taught farming as workers with a view to one day having their own smallholding to rent from the Crown. The wheat harvest had been in full-swing with the crop cut by a horse-drawn binder the sheaves drying in stooks, so dense were the stooks that the reporter noted he had never before seen such a good crop ‘except on the warp in the Isle of Axholme’.

On a nearby field of oats one reaper was being ‘hauled by a tractor’ (1918). Cattle, sheep and chickens were also being farmed. Workers from the recently built cottages were encouraged to rear a pig for autumn slaughter, this being a universal source of working class meat at that time.

The reporter also encountered a few ‘land-girls’, one dressed in ‘breeches and leggings’ and ‘doing her bit’.