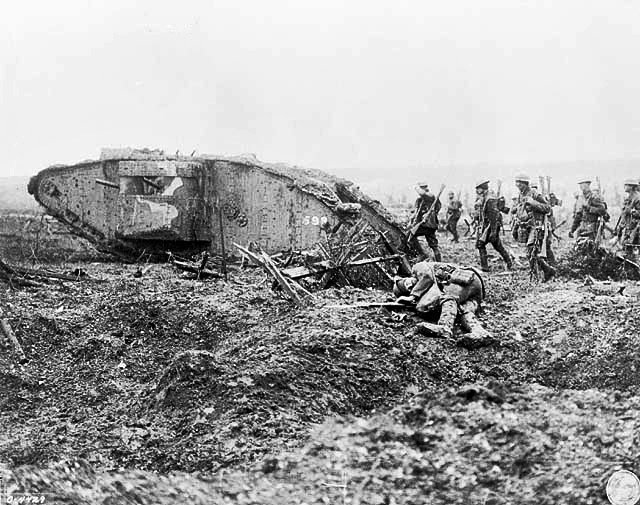 The above photo (taken from Wikipedia) shows Canadian troops advancing behind the cover of Mark 2 ‘tanks’ (see Article in this website on my father’s Great War service in the Tank Corps, 1917-1921) at the battle of Vimy, 1917.

An interesting episode in the history of the Sunk Island community was the ‘Crown Colony’. It has already been established that Sunk Island is/was Crown land, the ‘Colony’ was a specific project on part of the ‘Island’. There were ‘colonies’ all around the country (see mention in the above article), some large, some small in area, each being a product of the British Government’s resolve, made public long before the end of the War, to reward/acknowledge those who had suffered the horrors of the Western Front and then returned to their homeland. Another strand of this policy was what became known as the ‘Homes for Heroes’ campaign (for further detailed discussion on this point as it impacted on two rural areas of the East Riding see my M.Phil. thesis – see Publications and Articles).

The ‘colonies’ were areas of farmland earmarked for smallholdings for demobilised soldiers who wished to pursue  a farming future. From the outset a basic misunderstanding prevailed. Although perceived by the public as a form of compensation for those who had suffered physical and psychological injuries the stark truth was that such men would not be able to cope with the workload and worry associated with making a smallholding pay, a point made clear by the Director of the Sunk Island colony and reported in an article in the Hull Times from July, 1917.

It seems from this newspaper article, and one on the same theme a year later, both reproduced in A Sunk Island Miscellany (s.p.b.s), that the land allocated to the ‘colony’ was somewhat neglected and overgrown. In 1917 there were no ‘settlers’ yet but 24 of the projected 46 cottage homes had already been built, each house having three bedrooms and ample windows so that the interiors benefitted from maximum sunlight (again see analysis of post-war housing in M.Phil. thesis).