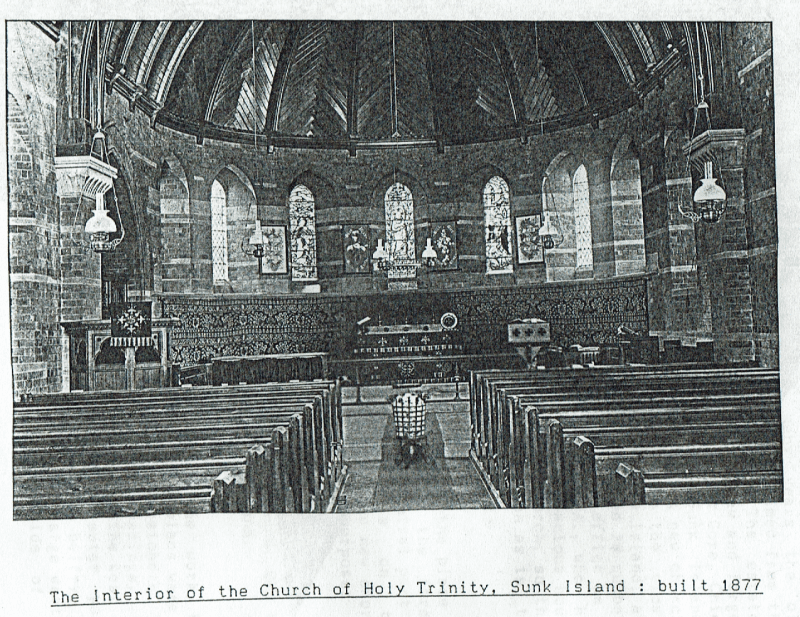 The above early photo shows the interior of the second church on Sunk Island consecrated in 1877, the apsidal east end shown as viewed from the nave. Like much of the information conveyed recently this image comes from Meadley, J. A Sunk Island Miscellany (Malet Lambert Local History Original, Vol. 40, p. 22). The lancet windows set into the walls of the wide apsidal east end and the herring-bone arrangement of timbers forming the chancel ceiling contrast with most other apsidal chancels. It seems that gas lighting was installed from day one, a feature to be envied in many other later mock-gothic churches. The object shown in the middle of the nave aisle seems to be a cauldron, such an airy building would be very cold to those opting to attend mid-winter services/sermons but an open cauldron must have been taking a chance. If pew-rents had still then existed those nearest the cauldron would have commanded a premium.

In 1890 the vicar of Sunk Island died. The ‘Island’ had been long served by Revd. T. Sutton as he had already been incumbent at the first church for 19 years when the second was opened in 1877. Having lived in Withernsea and travelled to services on Sunk Island he was rewarded with a new-build parsonage house, contemporary with the church and beside the graveyard. A list of his household furniture sold by auction in Withernsea survives, the list includes an invalid’s chair (unsurprisingly), paraffin stoves, all the multi-layers of bedding that existed before the coming of the duvet plus a dog-cart (poor thing) and a pony cart.

The Rev. Sutton was succeeded by  the Revd. W.M. Holmes Milner who in 1904-05 was embroiled in a legal dispute heard at Hedon Crown Court in 1905 with the judge openly stating in court his surprise that ‘two educated men of the Church of England (should be) bickering and fighting over such matters’. But my readers won’t be interested in that.