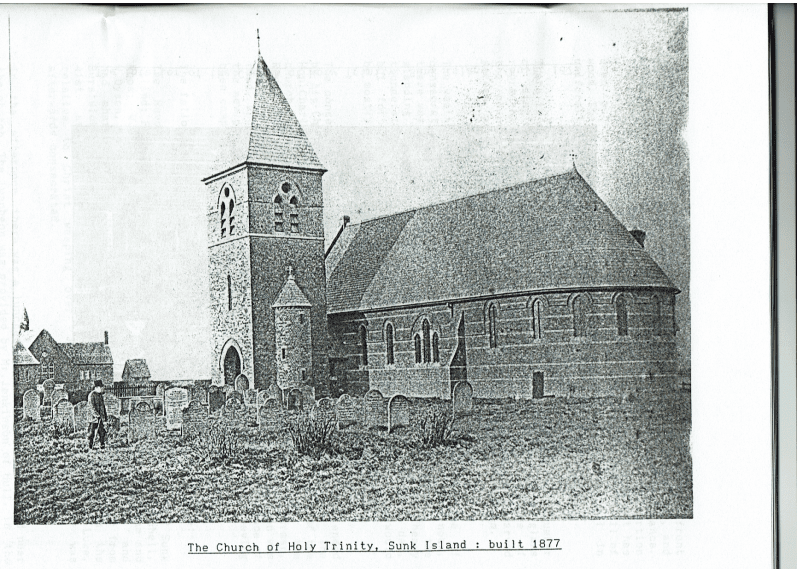 The picture above is an early photo of the second church on Sunk Island with the elementary school building just showing on the left, this now a private house. The church is a very distinctive building built to a plan drawn by the appropriately named Ewan Christian ‘architect to the Ecclesiastical Commissioners’ (Hull Times, August, 1877). The red brick church incorporates stone bands and dressings (this walling being very much a Hull style of the late 19th and early 20th century for ecclesiastical/public buildings, s.p.b.s on Hull Cemeteries). The single lancet windows show the mock-gothic church was built to the Early English style, the apsidal east end and the continuous width along nave and chancel being distinctive features. The two-storey tower, topped by a pyramidal spire and with a curiously designed external spiral staircase to the ringing chamber, was given geometric tracery to the belfry openings and was sited not at the west end but over the south porch.

Sunk Island’s second church, built in 1876/’77, was built very close to the site of its predecessor included an extension of the existing churchyard.

It is a nice example of Victorian priorities whereby as the lived-on and worked-on area extended and the local population expanded (albeit modestly) the priority provision was considered to be a place for public Christian worship and, to be fair, a place for elementary education – no provision of shops, doctors, transport services or the like. Evan the 1901 Kelly’s trade directory for Sunk Island lists no carriers, the community being, presumably, served by carriers from Ottringham, Keyingham, Patrington and, maybe, Easington. The ‘commercial’ names listed in this Directory extract are almost exclusively farmers and cow-keepers, most, surely with their own private transport in the form of carts or pony-and-trap etc.

Also shown in the photo above is a roofed lych-gate and a gentleman with top-hat and cane in the churchyard.