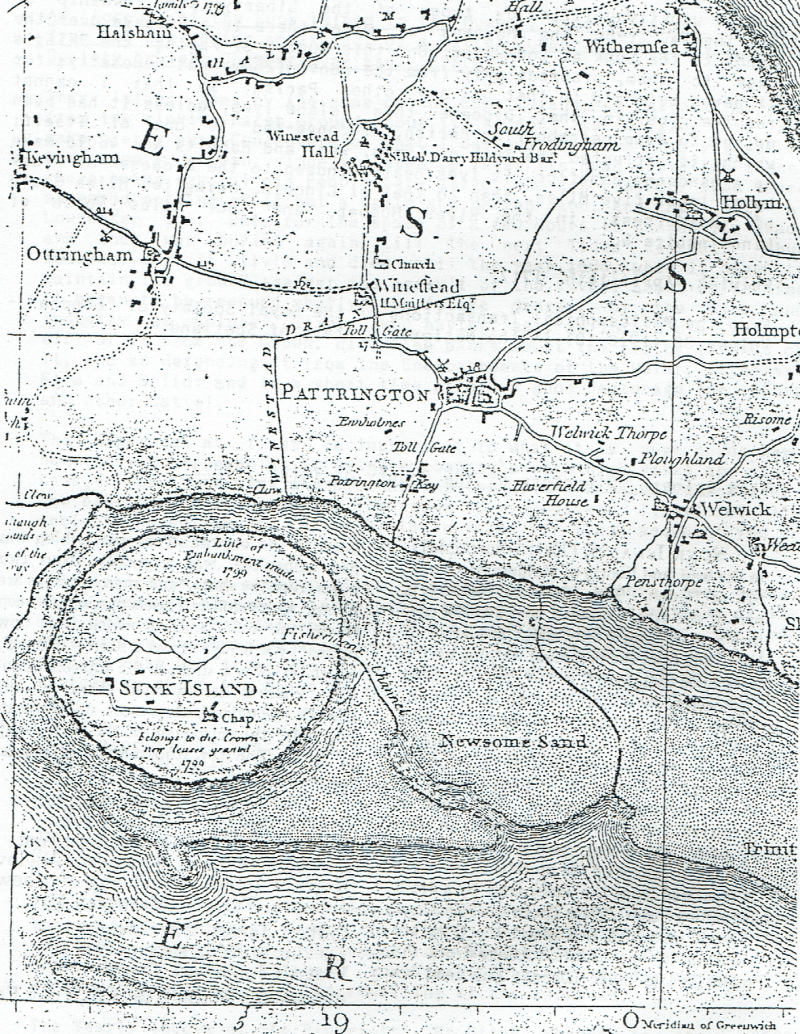 In mentioning recently to Ian Wilkinson, ex-work colleague and active member of Hessle Local History Soc., of my current blog title he commented that he and his wife sometimes drive to Sunk Island, particularly the part around Stone Creek, for although the landscape is monotonous the magic is to ‘hear the quietness’ (this not so at harvest-time as the main crop grown is wheat). The oft used phrase ‘the silence was almost palpable’ applies here. Sitting at points such as Stone Creek or Hawking’s Point the repetitive swish of the minimal wind-waves (s.e.b.s) is very therapeutic.

I have a double sheet photocopy of the text about Sunk Island from a trade directory. Foolishly I haven’t recorded which directory or its date but from the lay-out I suspect it was from a Kelly’s Directory and from the dates given I suspect it to be 1890s. Trade Directories can be a valuable source of evidence for various lines of research, trades, names (later ones e.g. 1930s almost like early telephone directories) and with a preamble about the history of the settlement in question. This preamble can be very informative although errors often got repeated in successive editions.

This particular preamble gives the acreage of Sunk Island as nearly 7,000 ‘according to the Ordnance Survey’. It goes on to state ‘Sunk Island is an interesting instance of the compensating action of the sea, which, whilst robbing the land in one place, is depositing rich tracts in another’, referencing the marine erosion along the Holderness coast and the growth of Sunk Island. By discovering that the bulk of the material forming mud-flats throughout the Estuary comes from the erosion of boulder clay along the Holderness coast and the action of long-shore drift (and not from riverine deposition from rivers flowing into the Estuary) research by the Geography Dept. at Hull University in the 1970s confirmed the Directory’s assumption.

The map above is an extract from Jeffery’s Map of Holderness, 1804.