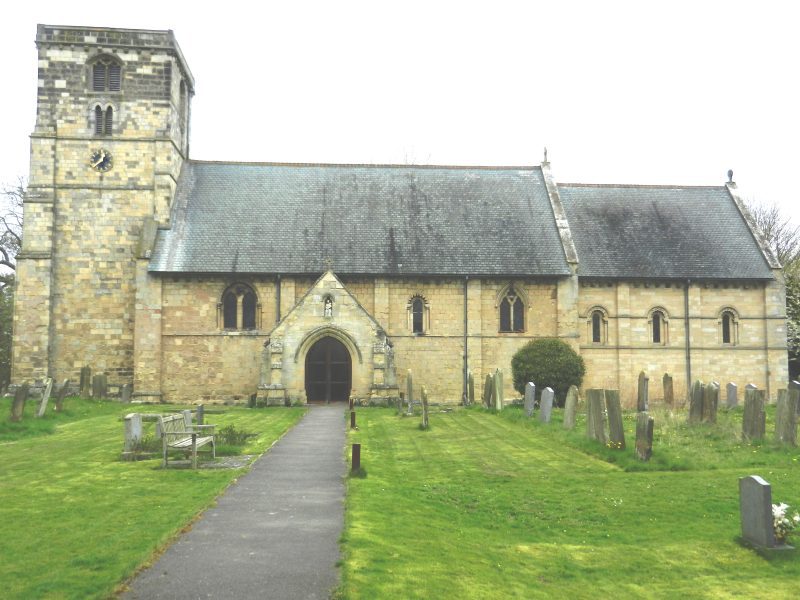 St. Mary’s, Kirkburn (see above) (near Driffield), visited after lunch provided at the village hall, marred by heavy rain but helped by input from Mr. Adamson, church-warden. A fine Norman church, said to be second only in the East Riding to the grand Norman church at Newbald. The chancel although retaining the features of its original Norman build was in fact rebuilt just after the Napoleonic Wars and then restored in the 1850s, a restoration overseen by J.L. Pearson (a famous architect who worked on many Gothic Revival church restorations) and commissioned by Tatton Sykes of Sledmere House in the high Wolds. The west tower is a product of three upward extensions during the Middle Ages while the Norman carved decorative stone-work is concentrated in ‘orders’ around the south door and chancel arch. The triple ‘opening’ in the walling above the chancel arch is an addition to the traditional fabric, a whim of Pearson’s. The somewhat gloomy interior (to our eyes) is reminiscent of that in the great Norman church at Stow, between Lincoln and the R. Trent.

Here is a most remarkable ‘rustic’ Norman font, world famous for as Mr. Adamson told us it has been the subject of post-graduate students’ theses.

Immediately north of the churchyard is a gully at the head of which is the spring that is the very source of the River Hull. This figures in my illustrated talk on the History and Navigation of the River Hull which is to be included in those to be given at the Hull History Centre over the national Heritage weekend but which, like my other illustrated talks, has not yet been condensed into an article for Publications.